AKA Responds To Reports That He Hired Cassper

AKA Responds To Reports That He Hired Cassper

Kiernan “AKA” Forbes’ representatives have released a statement refuting the claims that he hired Cassper for The Braai Show.

In a released statement, the company said, “Kiernan Forbes and his management team have become aware of insinuations that “The Braai Show”, of which he is the co-owner, will go ahead with a new presenter in its second season.

“The matter has been with Mr. Forbes’ legal team while a resolution to the impasse was being negotiated and will now be solely in their control to expedite legal intervention” 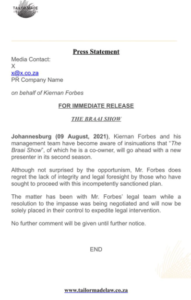 Entertainment Commentator Phil Mphela said, “AKA owns 50% of #TheBraaiShow & is the Executive Producer. I reached out to AKA’s management to get clarity on his involvement on #TheBraaiShowWithCass, and per T Effect statement, he was not consulted for approval.#KgopoloReports

He further said, “Deducing from this statement and the info I have been able to gather. It would appear, the other producers on this project made an offer and signed Cassper without AKA’s approval as co-owner and executive producer.
Did Cassper know that AKA still owns the IP?”

These were people’s reactions following the statement:

“There is nowhere in the statement where it says 50 percent ownership though. If he isn’t funding the production and doesn’t know what is being produced how is he 50 percent owner”

“Cass will back off from this deal when he learns AKA is a part owner. He was so spicy this morning shame”

“Buh why does he need to take legal action if he wants a success on the show that he kind of own? Shame! Sometimes people must know where to place their beef!”

“Yeah not doubting it but who holds majority of the stake… That’s the person that signs off on these things… Thinking face Since when did SABC cut deals with production houses, usually they purchase the full rights to the show… They could run repeats all week and they won’t see a cent”

“Lol dude why do u bother. You do know this is a marketing strategy by these two… they want us to talk and tweet about this. The only lost people in this whole things is us the viewers. And am sure the two parties know exactly what is really in the claws of the contracts”

“You know @akaworldwide is back when there is so much drama on socials …yoooooh my fave…should let cassper host that show eat money, come back on season 3”