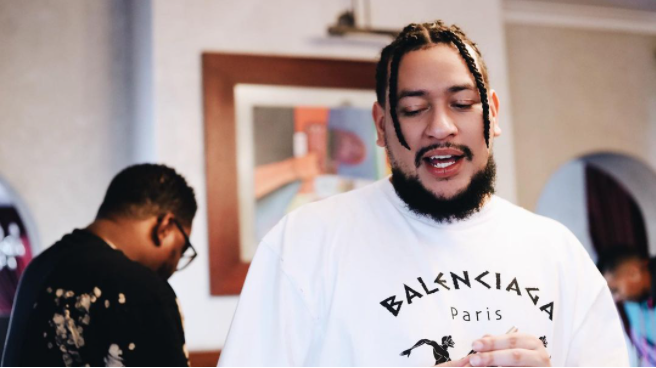 AKA, real name Kiernan Forbes, is slowly getting his head back in the game. The rapper has resumed his business dealings with Cruz Vodka after putting the brakes on his partnership. This was apparently due to the negative publicity he received after the death of his fiancée Anele Tembe.

When Super Mega announced that he was parting ways with the alcoholic brand, he said he did so willingly to allow himself some time to mourn Anele. This was out of respect for Nelli’s family and friends as well as his own mental state.

He announced this after disturbing images and videos of he and Anele were leaked promising to tell his side of the story, of which he did.

“We back in business. @cruzvodka … Please make sure you stock up & enjoy RESPONSIBLY … stay safe 🇿🇦,” he announced.

Announcing that he and Cruz were halting their business dealings for a while, AKA said it was a way to deal with his personal troubles. Also to pay respects to Nelli’s family and friends so that it does not seem insensitive if he continues on with life as normal.

Read the full statement which was shared with Daily Sun:

“Beyond dealing with the loss of Anele, the love of my life, I am also having to deal with the snippets taken out of context of our relationship that found their way to social media,” he started off.

“I will share my side of the story in a sincere and honest manner, which will afford me the greatest of respect to the relationship I shared with Anele and both our families. I am not perfect, she was not without her flaws. But I’m not what events of the last few days have painted me to be. We were in love and had committed to each other.

“Having had time to reflect on the past few days, I have engaged with my business partners and I feel that it is best that I temporarily step back from my duties with Cruz Vodka as I need this time to focus on the way forward and deal with my personal matter.

“I have done this for the sake of Anele’s memory which will forever be entrenched in my heart, our families and my fans. I am grateful to my business partners at Cruz Vodka for all their support and understanding of this decision to give me time. Daily I wake up to the reality that the person I was building a future with is no more, the pain is unbearable. With God’s grace I will remain strong and pick up the pieces,” he announced.

As the last person to be with Anele before she fell from the 10th floor at a Cape Town hotel, her case was investigated as murder and he as the suspect. The National Prosecuting Authority (NPA) recently passed the case back to the SAPS to be investigated as suicide.

His interview with Thembekile Mrototo helped the investigators conclude that Anele was suicidal. But the plot continues to thicken as DJ Zinhle is being mentioned again in the investigation after b**chy comments about her, made by Nelli were deleted from her phone after the funeral.