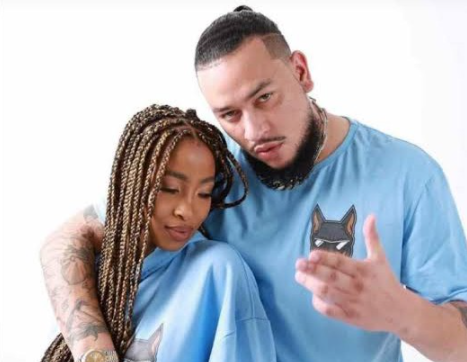 AKA has been labelled rude and disrespectful following his interview with 947’s Thando Thabethe, on her ‘947 Drive with Thando’ segment. The rapper recently dropped an EP with Costa Titch called ‘You Welcome’ and has been doing various interviews to promote it. When he sat down with the actress, all that was going on in his head was to talk about music, little did he know, Thando was going to hit him with a question he did not expect.

The two artists joined forces to collaborate on the EP but it received a lukewarm reception from listeners. With all the hype and excitement for his EP, all that was going on in AKA’s mind was probably to promote his body of work. So when Thando asked him about his late fiancée who he had paid lobola for, AKA unleashed his “rude” side which many dislike him for.

After speaking to Costa Titch about their music, Thando placed the spotlight on AKA and wanted to address the ‘elephant in the room.’ Confused at what the elephant in the room was, AKA asked Thando to clarify and so she did. Thando did not beat around the bush so she asked AKA does he feel the need to talk about Anele Tembe’s death in more detail since he did not fully address it when journalist Thembekile Mrototo interviewed him about it.

A very defensive AKA asked Thando “so?” and proceeded to tell her he does not want to talk about it.

“We have to speak about the elephant in the room…you had a sit down with one of our own Thembekile Mrototo a lot of people felt like you said nothing in the interview,” she asked. An uninterested AKA said “so” and shook his head. Thando presented an opportunity for AKA to say something but he did not budge.

“Do you feel a need to say anything about the incident that happened?” asked Thando, but AKA told her it is not an incident to him but it is his reality. “You wanna call it an incident this is my life bro. To you it’s an incident,” he said.

“It’s nobody’s business but my own. It is something that I am living with in my life, it’s none of your business,” he said. At the end of the interview, Thando gave AKA the middle finger, but high-fived it out and laughed.

AKA lost his fiancé Anele Tembe when she took her alleged fatal fall at the Pepperclub hotel in Cape Town. There has been a lot of hearsay with people questioning AKA’s nature wondering if he has been abusive towards Anele. He decided to sit down with Thembekile Mrototo on Bar Leader’s YouTube channel, but a lot of people said he was making a mistake.

That’s the incident Thando was referring to and asked AKA if he would love to clarify a few things but he was not interested.

In the interview AKA did explain that he did not want to address the incident but he had to. He said they argued on that day and all she left with him was the engagement ring, “…the thing that really breaks my heart – I have my ring with me – it’s the only thing that I have of her belongings and she took it off and threw it at me. We said very mean things to each other and I left the room. Came back to her room because I had taken her phone.

“And things took a turn for the worst when we got to a point in the argument where Anele kind of threatened to kill herself. I had called reception for security and kind of tried to remove myself from the situation. And I think out of panic, I didn’t want to be there or feel that this was going to happen. So I went to the bathroom and when I came out of the bathroom she wasn’t in the room. And I looked around the room – she wasn’t there – I get to the balcony and I look down to the street, that’s where she was.”

The interview received some mixed reactions from people who said it was a big mistake as he left viewers with nothing.

Bonang Slays At The VMAs