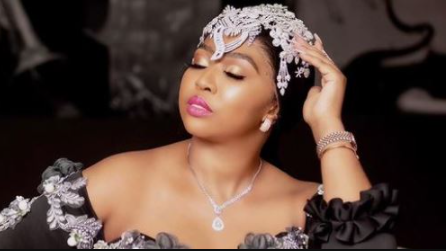 Ayanda Ncwane’s good work is finally paying off. She was recognised in Nigeria last night as she bagged two awards that we are sure are a start of new and even bigger things.

Speaking to Clima Magazine on Instagram, Ayanda said, “Thank you so much Clima Africa Awards. I would like to give honour and glory to God almighty. Tonight is the biggest night in the music industry, of course the Gospel music industry. Thank you for the award that have received tonight and i don’t take it for granted.

For the past decade i have been the captain of the industry and I have walked this journey with the Lord, receiving so much love through our fellow brothers and sisters all the way from Nigeria. It means a lot to me and my career of course. It means that I have a responsibility… and make sure that other females who are coming after me, joining the music industry, they see the light and see that the music business is actually the business and it needs to be treated as a business so thank you so much and God bless you. ”

Ayanda was also part of the judging panel at the Mrs. Universe Africa pageant and lets just say, the madam never misses. She has brought it once again. She took to Instagram to share what an honour it was for her to be on the pane.

She said, “It’s been a minute family 🤗Last night at the @mrsuniverseafrica it was an honor to be part of such a meaningful women movement. Thank you @bokang_m for trusting me as one of the ladies who were judging. Congratulations to the newly crowned Queen 👑 and definitely to all the ladies who entered the competition”

Fikile Mdiniso took the crown and we are so excited for her. She said, “Don’t limit your challenges, challenge your limits because if it doesn’t challenge you it doesn’t change you🌺🌺🌺Looking forward to represent the African continent in Seoul, South Korea for Mrs. Universe🎊Forever grateful for this moment🙏”

The director of the pageant Bokang Montjane-Tshabalala thanked Ayanda making this possible. She said, “Oh queen. Thank you for saying Yes and being part of this amazing experience…YOU ARE A PHENOMENAL WOMAN”

Ayanda is reportedly leaving the successful Real Housewives Of Durban show and will not be a part of season 2, which has apparently started shooting. This is apparently because the show is tainting her late husband Sfiso Ncwane’s legacy.

When the first episode premiered we were rocked by news of Nonku Williams being Sfiso’s baby mama. From the very beginning, that is what enticed viewers and they got hooked immediately. Perhaps the storyline worked in the show’s favour but the woman who is at the centre of it all, Ayanda Ncwane is not happy about this.

Shauwn Mkhize Says She Does Not Share Her Man With Anybody