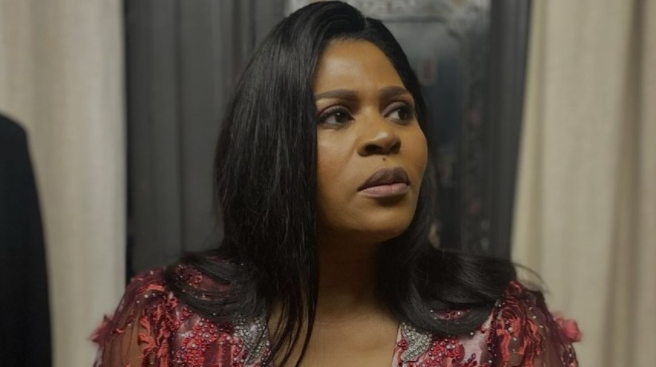 Uzalo viewers will be pleased to know that the show is stirring things up with the return of legendary actress Baby Cele next month.

The actress’ character on the show, Gabisile, will not be coming back as a ghost but she will actually be back as herself after her husband Qhabanga, played by Syabonga Shibe, strangled her and tossed her in the river with the purpose of killing her.

According to reports, Gabisile’ return to KwaMashu — where Uzalo is set — will have have a backstory and she may come back a changed woman after heresies which led to her husband wanting to kill her.

When Baby Cele and her on-screen husband on the show left, a statement was released regarding their departure which read, “Baby Cele and Siyabonga Shibe will indeed be leaving the show by the end of season six of Uzalo. The story has taken this direction and will give us a riveting, high-stakes ending for both characters. The decision was made in consultation with the two actors. Both have given a tremendous amount to their roles on Uzalo and we are forever grateful for that. We will be introducing a host of new characters played by South Africa’s best. Please stay tuned and see as the story unfolds.”

Baby Cele had been away from the SABC1 soapie because she was busy shooting on the new e.TV drama series that recently took over from Rhythm City, titled House of Zwide. But prior to that, it was reported that the actress had also been cast in the international film, Red Cargo. The late Menzi Ngubane was reported to be joining Baby Cele and other American actors for the upcoming film Red Cargo which was said to hit the big screen in 2021.

Reports suggested that the film would be shot in the country and other local actors in the movie are Siyabonga Shibe, Israel Matseke-Zulu, Luthuli Dlamini and many more. Last year, the producer of the film, Senzo Zindela, also revealed that the now-late veteran actor Menzi Ngubane would be playing lead in the movie whilst Baby Cele plays the role of his mother.

Another actor who chose House of Zwide over Uzalo is Khaya Dladla. The radio presenter recently spoke to Isolezwe, where he said his contract with the upcoming Etv telenovela is lengthy as compared to Uzalo’s.

Although he could not say why he left the show for good, unlike Baby Cele, he could not promise his future with the SABC1 soapie because there are a lot of scenes he shot with the show that are still yet to be played.

Another factor fot Khaya was that both the shows are shot in two different cities so he would not be able to manage the conflict that would have risen.

“When we returned to Uzalo, they did not inform us (he and Nokuthula Mabika) how long we were going to stay with show. Other cast members knew they were only going to be with the show for a few weeks then their contracts lapse.

“That is why when the opportunity aroused for me to join House Of Zwide, I could not turn it down because I know how long I am contracted to stay with them which years to come,” he explained.