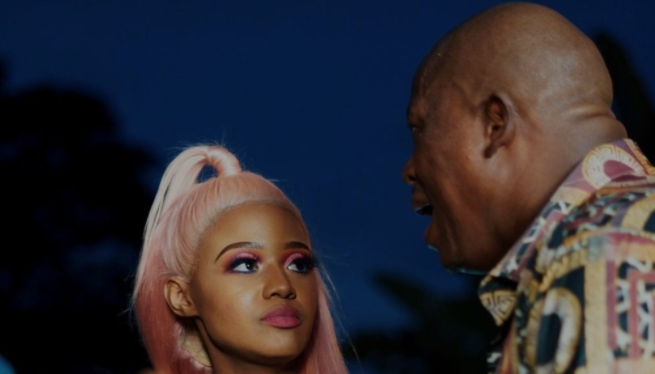 After introducing their son, Sponge Wodumo, to the world, they have been having the most fun on social media — especially on Instagram — so much so that they created an Instagram account for their him and he is already being followed by more than 20 000 people. Can your 1 month old ever?

The West Ink Records couple is known for heating up the dance floor with their hits, such as Wololo, Ka Daz, Elamont’, Sdukuduku and others. Now, as little as he is, baby Sponge Wodumo is also joining in the family business by following in his parents footsteps.

Although Babes and Mampitsha have not revealed too much about their son; fans don’t know his real name or face; his nickname ‘Sponge has stuck. When Mampintsha’s mum, Zama Gumede, set tongues wagging with her viral video in which she was seen dragging Babes for filth a few days after their traditional wedding, she accused her daughter-in-law of faking her pregnancy and claimed that she has a Sponge for a baby bump. Babes and Mampintsha took that with a pinch of salt and decided to call their son, Sponge.

When Sponge Wodumo’s Instagram account was created a few weeks ago, fans were buzzing, not from excitement but from laughter when they came across the funny captions he “posted”.

When Mampintsha posted a picture of him holding little Sponge, with the caption, “For all the things my hands have held, the best by far is you @sponge_wodumo,” Sponge responded and said, “Thanks Dad.” Fans were in stitches at this reply, but it wasn’t all they’d see. Baby Sponge Wodumo wanted fans to get to know him, so he played the QnA game and answered their questions ; slso revealing that he’s not ready to be a big brother just yet.

Now, having worked tirelessly in studio, he’s asked his legion of fans when they’d like for him to release his new track, which by the way, they love. Many of them want it released ASAP, however, his manager and father said that Friday would be the right day. So we wait.

Sponge’s mother recently went viral on social media after she came out guns blazing to drag single mothers whose baby daddies do not pay maintenance.

Sending out a scathing message to some of her audience who were questioning why she ingests alcohol while she is breastfeeding her baby boy (Sponge Wodumo) who is just about a month old, the Gqom’ Queen lashed out. Babes Wodumo wanted to make it clear that despite what many might think of her, she got married first then she had a baby, so people should not compare themselves to her.

Completely unbothered by her utterances which definitely ruffled feathers, she went on to ask young women why they gave birth at a young age.

“Your baby daddy made your pregnant then left you with the baby, I wonder why you gave birth at a very young age. So I don’t want nothing to do with that,” she said while dancing,” she added.

“No Vaccine Card, No Entry”