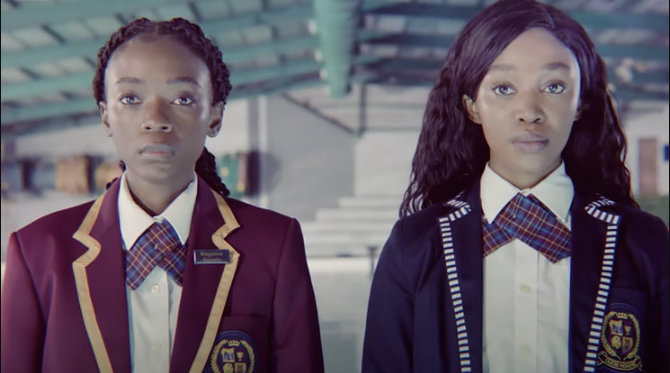 Blood And Water fans are going gaga after a new trailer and release date for season 2 got released today. The star-studded drama series has added fresh new faces to spice things up and the 24th of September seems like eons from now.

Yes, you read that correctly, Blood And Water Season 2 premiers on September 24 only on Netflix.

Time for the truth to surface. Blood & Water returns 24 SEPTEMBER. Only on Netflix. #BloodAndWater pic.twitter.com/iZjwtRDY4K

The new kids in the block are Leroy Siyafa, who will debut as Sam – who is a new love interest. Then we have Reece – played by Greteli Fincham a little better in season two and will be introduced to two of her new friends, Pauline and Zayd, played by Katishcka Chanderlal and Alzavia Abrahams.

Parkhurt High does not get any better. Returning faces are the lead actresses Khosi Ngema, Ama Qamata, Natasha Thahane, Gail Mabalane, Cindy Mahlangu, and actors Thabang Molaba, Arno Greeff, Mekaila Mathys and Dillon Windvogel will all be coming back to join the madness.

Judging by the new trailer, it seems as though love triangles are evolving and some hearts will be broken. DNA tests will also be conducted to see if Puleng Khumalo was telling the truth about Fikile Bhele being her twin sister. But the fact that the DNA test sheet getting torn shows there is a new plot twist to expect and of course more secrets.

As you know by now, Blood And Water tells the tale of a twin baby getting stolen from a hospital by a nurse and subjected to living a life that is a lie. This is based on true events which took place years ago in the country.

Re-enacting the horrendous crime on the series titled Blood and Water, Puleng Khumalo, grew eager and investigates a swimmer by the name of Fikile Bhele who was abducted at birth. Puleng believes that a Parkhurst student, Fikile, is her sister and she gets herself transferred to that school to investigate the case.

She had already solved the case, six episodes later and told Fikile about it, but much to many viewer’s dismay, the series ended.

Blood and Water received rave reviews globally as it is available for streaming in more than 200 countries across the world. It took the number 1 spot in a lot of countries and it is without a doubt that it will do so again with the new season.

Just when i was about to unsubscribe Netflix goes and gives me a reason to stay #BloodAndWater pic.twitter.com/Eu5tPezvIw

It’s been so long, I’ve even forgotten what happened in season 1😭 #BloodAndWater https://t.co/K5gyOfDCK6

Just saw the trailer for #BloodAndWater Season 2!! I don’t know how to act!!! Im so excited. @NetflixSA pic.twitter.com/pn8kNElx79

Khosi Ngema spoke to ZAlebs in a sit-down interview months ago after season 1 premiered and she revealed that she had initially auditioned for the role of Puleng.

“My audition process was quite standard. My agency sent me the casting details, initially, I was sent to audition for Puleng, and when they called me back Nosipho the Director, told me that I should try the character of Fikile because there was something she liked and I changed. When I auditioned for Fikile, I was like wow I really messed it up, I was not confident at all, but I guess they liked what I did. My mind was blown away when they called me that I got the role, I literally ran around the house screaming” she said.

“She Is A Marketing Gimmick”