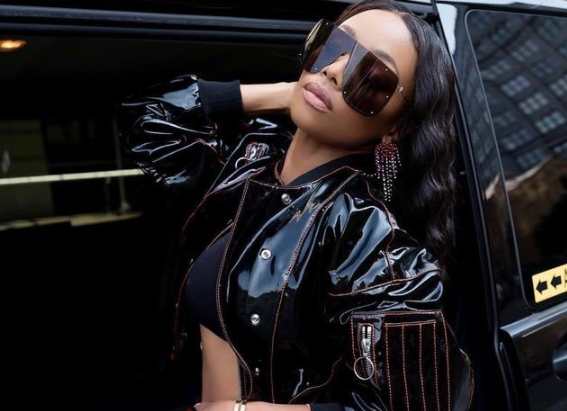 A day has passed now and Bonang Matheba still has not let the cat out of the bag. As per her promise, Queen B has something to get off her chest but she is making her fans wait for it.

Although her famous champagne House Of BNG Brut MCC has been announced as the official celebratory drink for the Miss South Africa 2021 beauty pageant, Bonang has something bigger she wants to drop – FILES.

The event is set to take place on Saturday, October 16, at the Grand Arena, Grand West in Cape Town.

She hinted a few hours after the announcement was made and that was a day ago, so sis is really making fans beg for it. 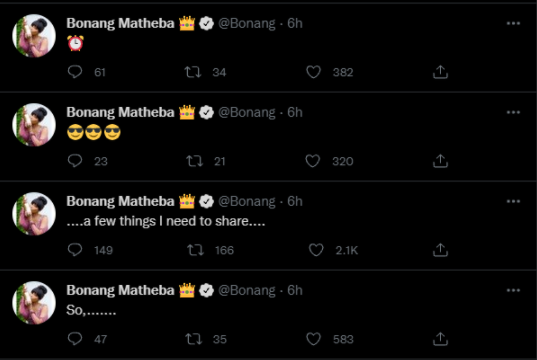 We guess we will just have to wait..as we are still waiting for B to drop those files on her former Being Bonang producer, Legend Manqele. Bonang said shooting the reality show has been her worst nightmare to date and told fans the possibility of another season is close to none. The Being Bonang door is closed, and Bonang has made that very clear.

“Making Being Bonang Season 3 was one of the worst working experiences of my life!! Glad it’s ending…remind me to tell y’all why one day!” – we are still waiting since 2019!

But judging from her responses and everything, the real problem seems to be the producer, Legend Manqele although we are still waiting for B to confirm that. She shaded him when he said, “the enemy of black, is black,” to which Bonang replied with, “lol – laughing out loud.” This was after the whole theft saga involving Somizi and his cooking show, Dinner At Somizi’s.

Bonang did not say the reality show business is closed, but she simply said Being Bonang is a thing of the past because they owe her money. She had another two-part reality series called A Very Bonang Year, which broke viewing records.

“I’m so excited to have a special on SABC 1. It’ll be very different from ‘Being Bonang’ because even if viewers have followed my journey, the show goes beyond social media with a behind-the-scenes look into a new chapter in my business career and life. I am taking viewers into my confidence” said Bonang.

Clapping back at her claims, Legend threw her under the bus and told The Citizen that the reality show got cancelled because it was simply not doing very well. “The tweet doesn’t refer to my company or anyone specific. All money was paid to her management. For the record, Being Bonang was canceled because it wasn’t performing. It was the channel that decided not to continue with the reality show,” Manqele told the publication.