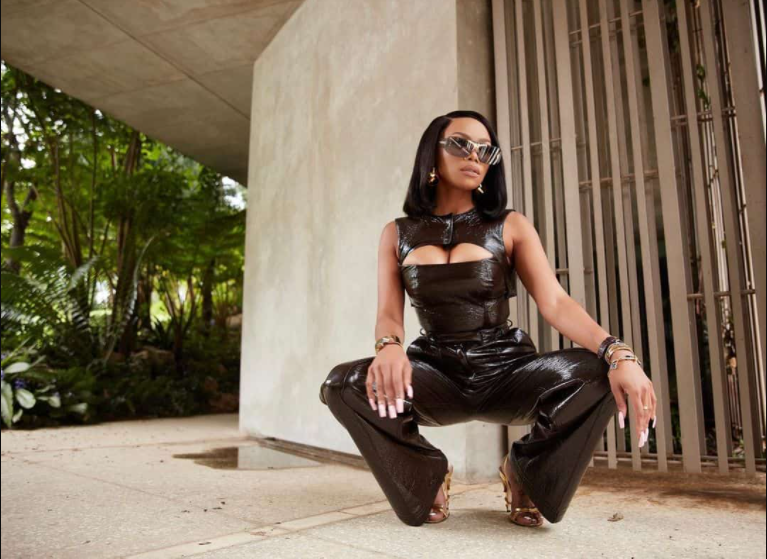 Bonang Matheba is on cloud 9 and in love with her boyfriend, who she has not revealed whether he is in the States with him or here back home. She said she is knee deep and cannot wait to give that man babies.

When she made that announcement, her fans wanted to know what man is she talking about but sis is wary not to share any details soon for obvious reasons. She said the last time she showed off her bae, his Instagram got spammed.

….I love this boy. Finna give him some babies. 🥰❤️

Bonang teased a few weeks ago that she is dating someone. The socialite and businesswoman promised to give her fans a sneak peek into her dating life. A fan asked her when will we get to see her new lover and she said she will be posting his knees very soon. Another asked if she is dating anyone and she responded with a GIF where she is winking at them.

She also shared that she is currently in a very good space and is enjoying her life! Keep in mind, sis is reportedly no longer a shareholder for House Of BNG.
After announcing the end of her work relationship with management company Celebrity Services Africa (CSA) Global, it seems their battle is getting messier.

The Sunday Times reported that CSA met up with the winemakers of BNG Veno Ventures and ended their relationship. This meant that Bonang Matheba might no longer be the shareholder of the MCC.

Bonang claims that she joined CSA Global whilst she had already bought House Of BNG. But the company said all intellectual property belongs to them and Veno Ventures.

In her statement on Spaces, Bonang said: “Today I wish to share with you some disturbing news. So over the last few years I have been in a business relationship with a management group to represent my brand. I have put my trust in them and gave them stewardship over brand Bonang to build and support it across all mediums including entertainment, fashion, and entrepreneurship,” she said.

Not wanting to have her ‘I told you so’ moment, Ntsiki said although she did say this since the beginning, she is not rejoicing. But all she wants to do is have a talk with the House Of BNG spokesperson, Babalwa Mneno. If you may recall, Babalwa defended Bonang by putting Ntsiki in her place when she made those statement about BNG.

Mneno said Bonang is not the only black person to not fully own their own wine or alcohol brand asking why Ntsiki always attacks her. She then called her a useless looser.