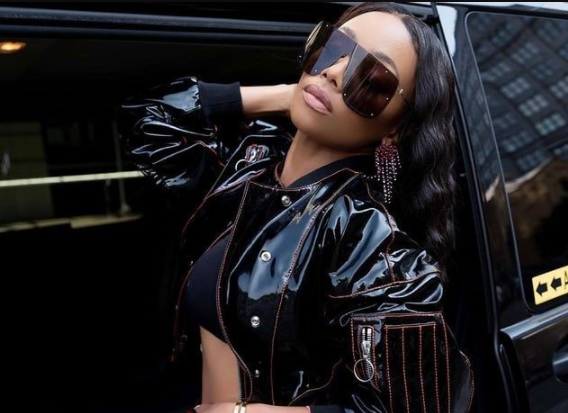 Queen B is currently living it up in New York City and serves hot content from time to time. Her fans have been growing suspicious of Bonang’s private life and they want to know more about her new mystery man – if he even exists.

On social media, Bonang Matheba teased that there is a new man in her life and her fans want to know more. The socialite and businesswoman promised to give her fans a sneak peek into her dating life. She tweeted a cryptic tweet about spoiling her person and that is what triggered her followers suspicions. She then wished her fans a lovely week ahead.

A fan asked her when will we get to see her new lover and she said she will be posting his knees very soon. Another asked if she is dating anyone and she responded with a GIF where she is winking at them.

So it is safe to say, Bonang does have someone in her life, it is only a matter of time until the Twitter detectives find the mystery person.

…one thing 'bout me, I WILL spoil you!

…have a lovely week!❤

Bonang does not plan on having children anytime soon. She revealed in an interview on IG live with IOL that she still wants to enjoy the high life before she welcomes a baby into this world.

Her future does consist of having children but she still wants to enjoy partying, drinking alcohol and so forth. “My life right now I want to party, to enjoy my alcohol beverages, to go to night clubs and party. I want to get on an Emirates plane at two o’clock in the morning and not stress anybody,” she said.

“I love children and I know as soon as I have a child everything is going to stop. I can’t have a child now because I am very selfish with myself and with my time. There are certain things that I want to do first and achieve before I bring someone into this world,” she opened up.

Whilst she is way, her rival Ntsiki Mazwai got another opportunity to rip into B once again. She called her a marketing gimmick for the “real” bosses of the House Of BNG sparkling wine range. Basically Ntsiki has always disregarded Bonang’s star power saying she is not an ideal candidate for black excellence.

Believing Bonang owned the wine was like believing she owned Revlon
…….. She is just the marketing gimmick to sell these products. Not the owner.

In her defense, Bonang’s BFF Babalwa Mneno, called Ntsiki a loser who still gets heart palpitations 10 years later. She does not understand why Ntsiki always drags Bonang for not owning her alcohol brands as if she is the only person who doesn’t.

“I’d rather cash in 2.5 million in being a gimmick than cash nothing because I can’t own it,” she wrote. She then advised her to go seek help from traditional healers, “This bondage of trying to fetch Bonang is disturbing, borderline obsession.” She then called Ntsiki a useless loser.

Letoya Is Not Bothered By All The Hate