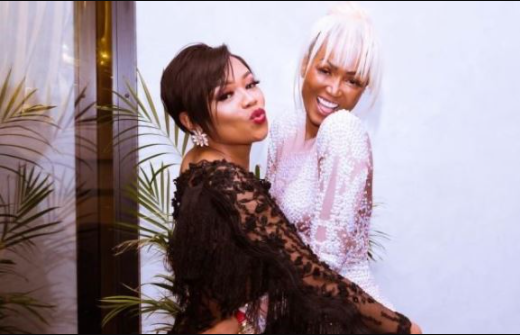 Ntsiki Mazwai is known for criticising celebrities and politicians whenever she feels the need to. Some do stand up to her but others ignore, block and move right along. But when she came for Bonang Matheba, for the umpteenth time, social media users dragged her, but one of the stingiest clap backs came from Bonang’s very good friend, socialite Babalwa Mneno.

The poet claimed that Bonang is not a true reflection of what black excellence is as she does not own the brands she associates herself with, i.e. House of BNG. This week, Ntsiki chose violence as she called Bonang a marketing gimmick for the real owners of House Of BNG, which she claims are white people.

“Believing Bonang owned the wine (House Of BNG) was like believing she owned Revlon….She is just the marketing gimmick to sell these products. Not the owner,” she said.

She then went on to explain what a real entrepreneur is, “Entrepreneurship is what I’m doing with my beadwork…. Where I own the whole value chain for my product and make ALL the decisions. Pricing, marketing, design, pay workers. Everything. It is not this cut and paste your name onto other people’s products,” she wrote.

Babalwa Mneno, Blackbarbielish on Instagram, clapped back at Ntsiki and called her a loser. She commented on an IG post and said that Ntsiki is STILL having nightmares about Bonang 10 years later. She then asked if Bonang is the only black person to not fully own their own wine or alcohol brand asking why Ntsiki always attacks her.

She then continued by saying Ntsiki should be open minded about some things saying that maybe being a marketing gimmick would make you more money than actually being the sole owner of the brand and starting it from scratch.

“I’d rather cash in 2.5 million in being a gimmick than cash nothing because I can’t own it,” she wrote. She then advised her to go seek help from traditional healers, “This bondage of trying to fetch Bonang is disturbing, borderline obsession.” She then called Ntsiki a useless loser.

Read the full clap back below: 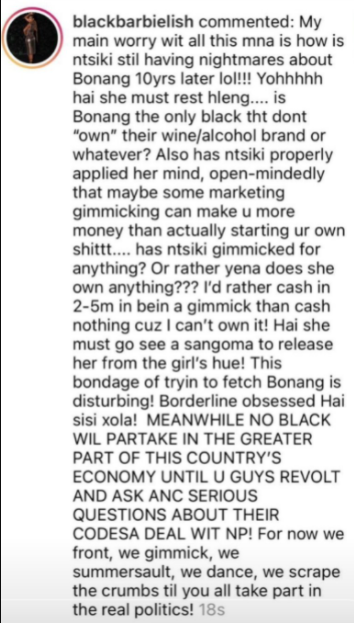 Ntsiki did not take the clapback lying down and hit Babalwa where it hurt the most. Babalwa was once accused of human trafficking and being in cahoots with Nigerians. The first allegations arose in 2018 and human trafficking became a problem again in the country, the allegations came back with people saying Babalwa is a pimp.

Ntsiki accused Babalwa of working with government and receiving dodgy funds for her “artistry” but not knowing where the funds went.

In her mother tongue Babalwa cussed at people and told them where to get off. It translates to, “F**k you and your parents to all those little pieces of s**t who are accusing me of pimping!!! Go and f**k yourselves, all of you, bloody starving dogs! FUTSEKKKK!…the end!”

She then said she worked hard to get to where she is and that she will not allow people to tarnish her name.

After calming down, she released a statement

Why Mmapitsi’s Wedding Will End In Tears