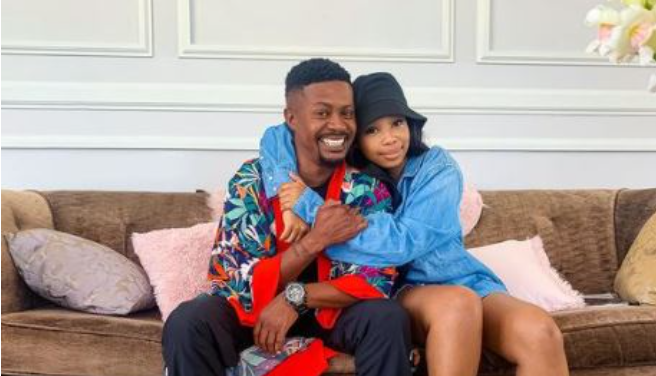 Jiva actress Candice Modiselle is totally smitten with Kagiso Modupe and has decided to appreciate him to show him just how much he means to her.

She took to Instagram and said, “Man, I could write paragraphs on what a gift to storytelling @kagisoyabakwena is. Those that have had the pleasure of playing alongside him will attest to his gift being the most selfless act.

“The world has recently seen the Vuvu & Menzi (affectionately referred to as ‘Zizi’ by Vuyiswa) story unfold on #JivaNetflix which was nothing but a dream. It’s a beautiful thing to share space with performers that make you feel like YOU can trust your choices and they’ll gladly support and follow you wherever you go. A most affirming experience. Every scene was just that. A game, an effortless give-and-take, a Masterclass. For that and for you, I’m forever grateful. I’ve earned a host of lessons from our story but also, I’ve gained a friend. Ke lebogile go menagane. May God’s grace surround you always.🙏🏽”

Kagiso is currently playing the character of Simo on Nqobile on Mzansi Magic. He is an abusive husband that blames his wife for every decision that his father makes that favours his wife. We see him show us a different said to him that we have never seen before.

Episode 2 of Nqobile played yesterday and we saw Simo receive his very own blows from his father for abusing his wife. Now that is how you deal with an abusive man. Kuddos to Nqobile’s father in law. Turns out, Simo’s father is aware of Simo’s dangerous dealings and how he is bringing the family business to its knees which explains why he gave Nqobile the CEO position.

Simo’s mother now knows that Simo is cheating on Nqobile but she won’t say anything about it. It seems she also knew about the abuse but she did not defend Nqobile, instead, she had been telling Simo to stop abusing Nqobile.

Nqobile’s father-in-law ended up getting stabbed after following Simo to have a talk with Black widow (played by Lilian Dube) and being the coward that he is, Simo leaves his father to die while he and the mistress run off so as to make it seem like they know nothing about his stabbing.

The show is getting interesting and we love seeing Kagiso pull off his role so good.

Kagiso is also a presenter of a new Mzansi Magic show, Wangkolota where he attempts to help those who are owed money confront those who owe them with a view of getting their money or belongings back.

Last week’s episode saw Kagiso going to Witbank to try and get back a 50 000 that was owed to a woman who gave her brother in law who has since divorced the sister’s sister. Kagiso ran up and down trying to track this man without success but when they finally found him, he made a ton of excuses that Kagiso was not taking to heart.

He was not having it but because he was there to mediate and get the money back, he tried to get the man to give back the money. The man ended up saying he will pay the lady the 50 00 in December of this year. The man however would not commit to the month by going to a nearby police station to get an affidavit which Kagiso called him out on.

Tweeps were not impressed by this man’s doing and concluded that the lady must just accept that she is never gonna get the 50 000.

What do you think? Is she ever gonna get her money back? We think the chances of the complainant getting her money back are 10 %.