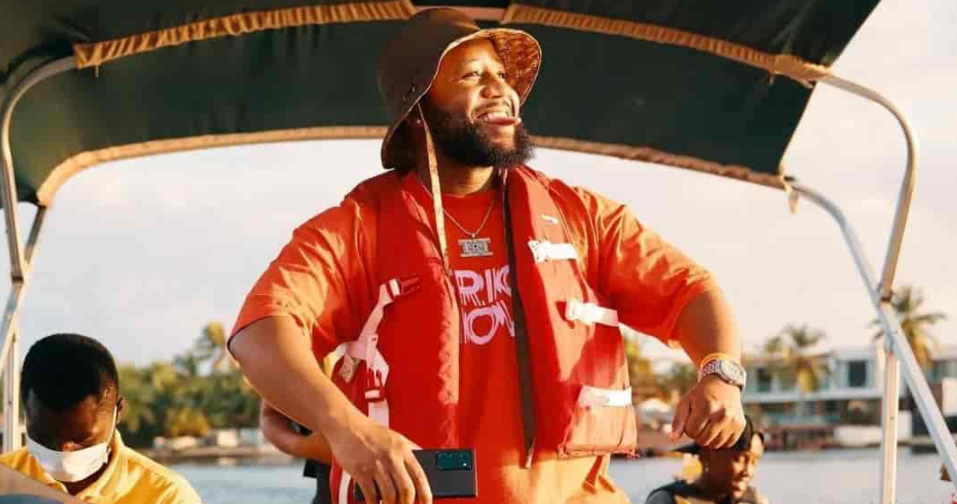 Costa Titch has taken a swipe at Cassper Nyovest for ditching the Hip/Hop industry and moving to Amapiano. For months now there has been a debate about whether the South African Hip Hop has died, and whether Cassper’s absence is the cause.

Rappers that have remained in the genre have vocalised their disapproval when it comes to the artists that have left the genre, to pursue Amapiano. When the genre supposedly fails, they do not want them to come back.

All these rappers never named and shamed anybody but it became pretty obvious who they keep referring to – Cassper Nyovest. The latest rapper to take a dig at Nyovie is his former back up dancer Costa Titch.

Titch has been one of the successful new kids on the block when it comes to music and has gained a large following. He too had featured in a few Amapiano tracks but stuck to his Hip Hop.

But Cassper publicly discredited Hip Hop and exposed the genre for gatekeeping, saying he has had enough of that. He is happy where he is at and does not wish to come back anytime soon. Unless people become nice to him, he might consider dropping a Hip Hop track or two.

Taking to social media Titch said, “SA Hip Hop is uniting right now. If you jumped ship, stay there and let us fix what you broke -respectfully.”

Cassper caught his sub and responded on Twitter, saying he wants Costa to tell that to his face. When a fan asked if he would release two Hip Hop tracks, Cassper responded pettily.

“Apparently Hip Hop don’t need Cassper Nyovest!!! They coming together and things are looking bright!!! Costa Ebile are yena he is fixing what I destroyed. Azange kea tsega yana mo lifeng. I’m back in SA and I can’t wait to run into him so he must explain in person…” 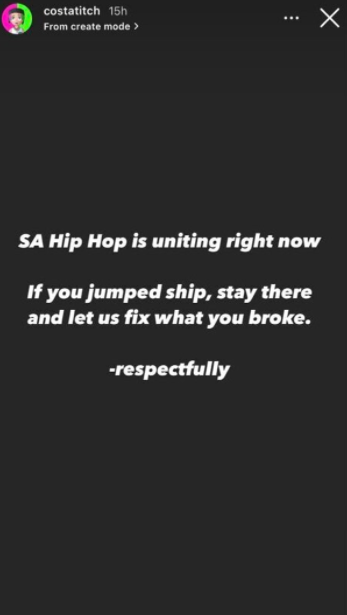 Apparently Hip Hop don't need Cassper Nyovest!!! They coming together and things are looking bright!!! Costa Ebile are yena he is fixing what i destroyed. Azange kea tsega yana mo lifeng. I'm back in SA and I can't wait to run into him so he must explain in person… https://t.co/yZZGdDqDA6

Cassper thought there wouldn’t be any drama in the Amapiano genre, but to his surprise he got dragged by Boohle for not writing Siyathandana – his biggest song to date.

“He only came with his verse. I wasn’t even there,” Boohle told MacG who proceeded to diss Cassper by saying his verse was not needed on the track, as Boohle stole the shine.

Cassper hit back at Boohle and said he is very disappointed, “This is so disappointing and I’ve watched it a few times. I won’t even explain anything about how this song was written but I got so much love for Boohle man. One of the most gentle of souls I’ve met and we made magic together. May God bless her, May she make many more hits.”

They worked on another track together with Abidoza, but Cassper has no interest in releasing it, as he does not want to work with Boohle in future again.