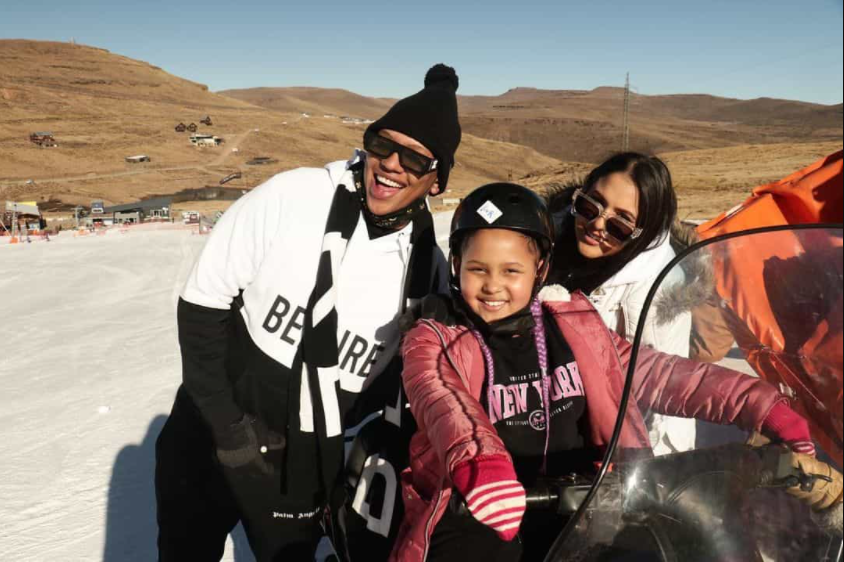 South African rapper Leslie Mampe better known as Da Les recently turned 36-years-old and has now informed her fans that he will be a father. He shared a snap of the mother of his daughter with a visible baby bump. “My biggest blessings and best birthday present.” He posted.

The couple were recently at the Afriski Mountain Resort to celebrated the Lifestyle hitmaker’s birthday. Leslie documented the whole trip on his YouTube channel.

Da Les, who has been a close friend of AKA for a long time saw the status of their friendship come into question following a letter that was read out on Mac Gs podcast. The tell-all letter was sent to allegedly expose AKA’s cheating ways.
The person who sent the letter requested to remain anonymous and alleged that Tembe suffered in their relationship. “Nellie was suffering in her relationship, she struggled with cheating and abuse from Kiernan. It started last year when she had mentioned to me that she had tried to take her life after finding out he had been sleeping with other women. But what shook Nellie was when she found sexual messages on his phone [between AKA and DA Les’ baby mama.” Read the letter in part.

In the same letter read out by Mac G on his Podcast, anonymous claimed that that cheating left Nellie devastated. “She was devastated and the messages broke her heart, it was all there in plain sight AKA was having an affair with Aurea, Da Les’ baby mama who was very much involved and still in a relationship with Da Les. They have a daughter together, Kiernan has been to multiple birthday parties for their baby.”

Anonymous also claimed that AKA paid an amount of money to Les’ baby mama to stay silent. “Kiernan sent Aurea R20 000 to silence her after she was feeling guilty and wanted to tell Da Les. Nellie found the messages and communication about the situation and she immediately called Da L.E.S to tell him and she sent him all the screen grabs.”

Following the episode, fans waited for a response from Les and IOL reported that they had reached out to him to get his thoughts on the matter. According to the publication, he neither confirmed nor denied the cheating allegations.

“In moments of tragedy, there are no winners. It is with a heavy heart, but I choose to focus on the future where my family and love is the baseline; I think we need a lot more of it to go around, as no one wins in conflict.” read the rapper’s brief statement.