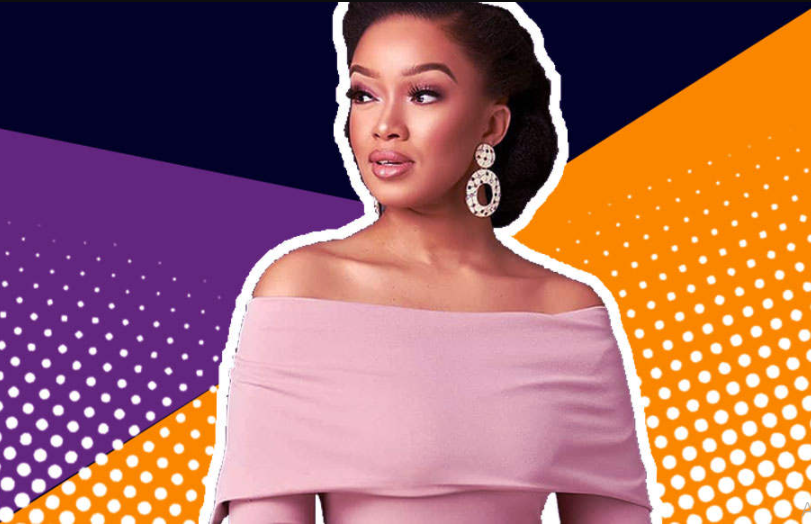 Dineo Langa is the epitome of individuals who have succeeded in following in their parents’ footsteps. She is the daughter of KG Moeketsi, a legendary radio personality who has dominated the entertainment sector for decades and has built her own brand.

Here are a few more things you should know about Langa.

On The Queen Mzansi, the much-loved character of Keabetswe Khoza, played by Dineo Langa, appeared to come to an abrupt end, but the episode left many fans angry!

When a car she was in burst into flames, viewers were confused and frightened, and many assumed she was dead before she even appeared on the show.

Many people thought her “departure” was lackluster, and some even pulled the producers of The Fergusons into it, criticizing them for their recent policy of writing off their characters.

Fans felt like The Fergusons wanted to give her a poor exit due to their drama behind the scenes just like SK Khoza.

Dineo Langa found herself back in the spotlight in the thick of the Fergusons’ drama.

Dineo Langa had not been sacked from ‘The Queen,’ according to show runner Laura Nel, who informed IOL that she had been fired by the Fergusons.

“Dineo’s contract was not terminated. She is still on payroll until the end of May. Dineo was released to go and shoot her movie. Scripts had to be rewritten to accommodate this as she was on an ‘A’ storyline. She was scheduled to return in April, but due to the lockdown, everything has changed.”

However, it seems like that is not the case.

Dineo Langa in attempts to clear the air about what occurred she said “Ang’buyi mina ngaxoshwa (I’m not coming back, I was dismissed),” she told a follower when asked when she would return to the Queen.

She went on to say that her character had been fired from the show and that she would be dying soon.

Dineo is the daughter to KG Moeketsi, one of the greatest icons in the entertainment industry.

Her mom has always been her support system and not one year goes by without Dineo showing her some love on her birthday.

Dineo studied at the National School of Arts (NSA) in Johannesburg’s Braamfontein neighborhood. Her experience at this university had a significant impact on her acting career.

She also studied at The New School for Jazz and Contemporary Music in New York’s Lower Manhattan. In 2009, she received her diploma from the university.

Dineo Langa’s husband’s name is Solo Langa, who is a rapper.

The two lovebirds ultimately decided to formalize their relationship with a magnificent wedding ceremony attended by invited guests, close family members, and friends.

They had been dating for over five years.

Although the couple has yet to have children, who knows what can happen now that they are married.

Wouldn’t it be wonderful to see Langas running around?

Dineo and Solo married in a white wedding on September 14, 2019, nearly four months after their secret traditional wedding in May.

Her wedding became a fairy tale that many coveted at the time and still envy today because of the exquisite detail on that outfit.

Like Kwesta, who had a music video made about his wedding day, #KhethileKhethile, Dineo, and Solo did as well, and the video is now available.

Despite the fact that just a few people attended the wedding, the two chose to allow their followers in by broadcasting it on Kwakuhle Kwethu, a unique wedding TV show that showcases the two. Minnie and Quinton Jones’ wedding was also broadcast on television.

Dineo and Solo are Fashion Goals

There’s no disputing that this couple has excellent fashion sense, and we can’t stop staring at their Instagram photos. She has the ability to turn heads even when she is alone.

Show business is a dog-eat-dog environment, and if you want to thrive, you’ll need to develop a thick skin quickly. Dineo had been told that she couldn’t act, sing, or be skinny enough.

Dineo is fortunate in that she has a constant cheerleader in the form of her mother, experienced radio and TV host Kgomotso “KG” Moeketsi, who assists her in overcoming the industry’s hurdles.

There was no turning back after she made her big debut on television.

She began her career as a host for O-Access, a music magazine show that used to air on Channel O, in 2011 and 2012. She was selected for this position after competing in a nationwide talent search. Nonhle Themba’s post was taken over by her.

She won a part as Kea Khoza on the TV show The Queen.

During the first season of Scandal, she portrayed Lindiwe. She played Naledi in the third season of ScreenTime with Nicky Grenwal. She played Shoki in one of Mzansi’s most popular family series, My Perfect Family.

She’s been known to host a number of events, including on the red carpet. She’s demonstrated her talent, and we give her a thumbs up.

Dineo Langa is a woman who has proven to be tenacious and successful in every part of her life. She is the epitome of the phrase “everything is possible.” She continues to demonstrate that she is a strong woman who has weathered the storm and is reaping the benefits of her efforts.

Lerato Kganyago Biography: Shy Teeneger Who Went For Greatness And Got It