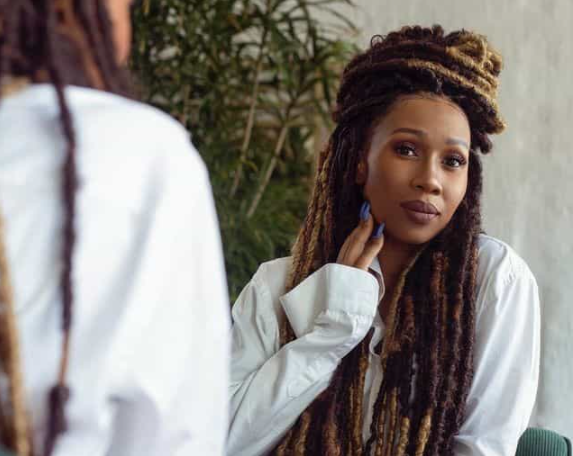 Dineo Ranaka did not quiet shock many when she revealed to the media that she is now a qualified traditional healer. Her fans were rather pleased and extremely happy for her – as she re-introduces herself as Gogo Somahashe.

Last month we reported that comedian Tall A** Mo also accepted his ancestral calling and graduated from initiation school. This was met with negativity – not because of his reputation of being an alleged rapist – but because Mzansi is somewhat fed up by the growing number of traditional healers, especially in the entertainment industry.

However, Dineo Ranaka’s announcement kind of made sense to many seeing how her personality, and the way she carries herself, made many aware that she has a gift of some sort. She also sparked this conversation in the year 2019 when she wore traditional attire and was surrounded by cows.

Speaking to Sowetan Live, Dineo Ranaka revealed that this gift made itself known 17 years ago. She had fallen sick and doctors and nurses could not figure out what was troubling her, until she met her teacher Dr Ngwato.

At first Dineo’s Christian faith made her neglect her traditional healing gift, something she tried to forget about and convince herself that it does not exist.

She described the process as very intense but she can now heal people as she graduated last week, “Undergoing the ancestral training is very intense. A lot of it requires you to forget about yourself completely. It requires you to forget your image and the status that you’ve built in your world. You need to strip yourself down and be one with nature.

“We spent a lot of time in the mountains digging trees and being taught natural medicines. As it stands I am a qualified traditional healer, I graduated last week. This means I can heal people through the power of spoken word and natural medicine.”

Many have the impression that traditional healing and Christianity do not go hand in hand, but Dineo Ranaka says she will do both.

With the Mahlangu family, the comedian revealed that he tried to run away from his calling, but now they had to accept it. It was very awkward for them as they had to dance in the suburban areas of Sandton.

“A few months back we welcomed home Mahambahlega (meaning u make people laugh ) drums rolled all night in the middle of our estate in Sandton after 6 months of spiritual journey and healing family generations welcome home, we tried to run from it for years until they came,” she said.

Hi initiation sparked confusing as to why are celebrities now becoming healers all of a sudden, but Ntsiki Mazwai, someone who is also undergoing her own initiation said it is simply black hate.

But you have no problem with everyone being Christian??? Tf black hate is this??? https://t.co/XIFbIE8FgE