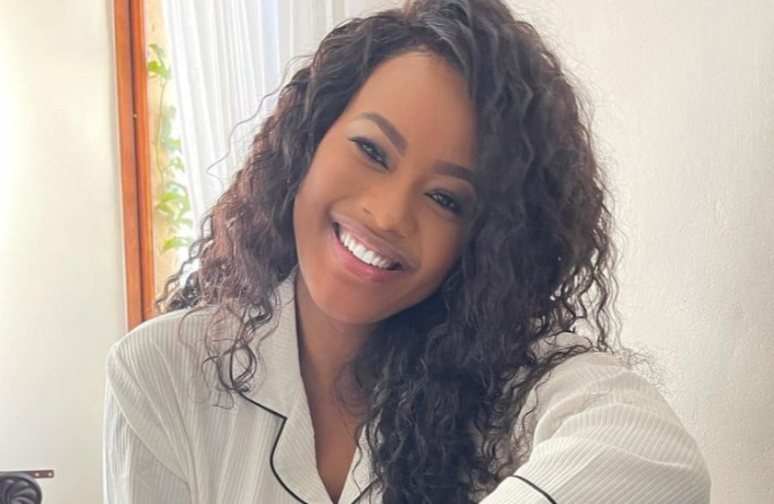 Following her derogatory statements made on a YouTube podcast, On The Table, Tshepi Vundla has since issued out a statement addressing the backlash. The influencer received heaps of insults after she dissed ‘broke’ woman whilst in conversation with hosts Tshepi Mabs, DJ Black Velvet, Noluthando Nkwali and the Ghost Lady.

The episode which premiered on September 1, trended a week later as social media users shared the two clips where Tshepi dragged women who depend on men to do stuff for them. The influencer who is dating rapper JR slammed the SBWL trend which has been popularised mostly by women. To explain what it means, SBWL is an acronym for sayibaweli which is a Xhosa word for ‘craving.’

Tshepi finds it distasteful for women to constantly SBWL things and expect men to provide these things for them. These things include baecations and the latest iPhones gadgets. She reckons that women should just ask their parents to do that for them or better yet do it for themselves.

Following the backlash, Tshepi released a statement today where she apologised not only for those statements, but also for her previous tweets. “They were mean and demeaning and there is no excuse for them. Through time I have grown as a woman, a partner, and most importantly as a mother, I have learnt many lessons on this journey, including kindness and empathy and that is how I live m life now. And part of these lessons I impart from my son.”

She said she cannot erase her past mistakes, hers is to just carry them as teachings moving forward.

She promises to do better going forward. She switched off her comments. Prior to releasing this statement, she had deactivated her Twitter account. Read the rest of her statement below: 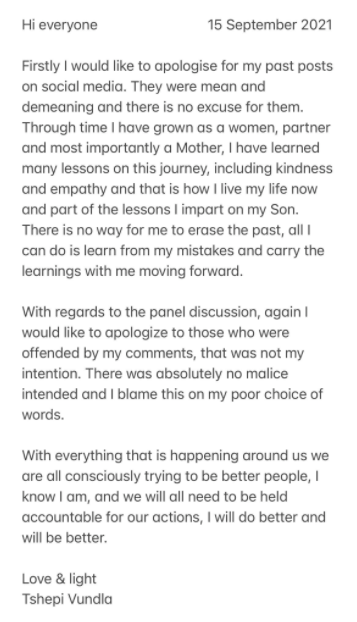 Whilst she was getting dragged, Lamiez Holworthy threw shade at a certain influencer for looking down on her whilst she was coming up. She did not mention any names but she quickly folded as she deleted her tweet.

“Someday when I have time, I’ll tell you guys how two ’influencers’ asked the brand manager on my first big campaign who I was and went on to say y’all will book just anyone’. Years later, one is catching smoke for talking rubbish and the other? Still can’t pinpoint what they do.”

Many insinuated that she directed her tweets at Tshepi who always trends for the wrong reasons. 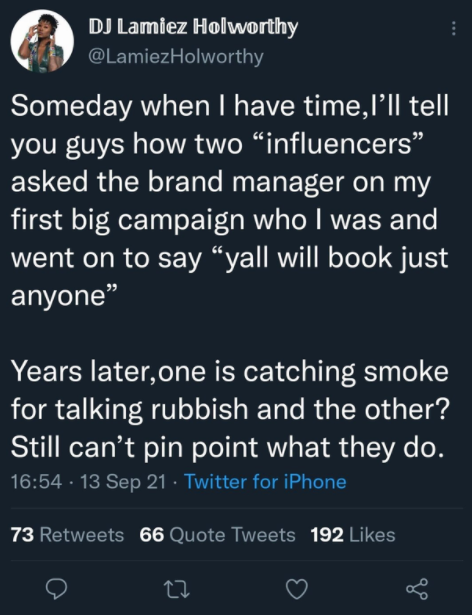 Following her apology, many feel as though she is not sorry for her actions and should not receive the symapathy.

Tshepi literally said she knows she might get dragged and it happened. She knew this was gonna happen. She’s not sorry luvs

Tshepi if you claim to have grown as a woman and a mother you wouldn’t have said half the things you said there with that much confidence. “Kindness and empathy” please nana no, take accountability and be better. Don’t gaslight us into taking your apology.
Love and Light ✨ https://t.co/d361bRUwfR

the reason your old tweets were dug up is because of the vile opinions you spew recently…you have not changed, we are smart people Tshepi, don’t disrespect our intelligence. you’re sorry? pls we feel sorry for you. https://t.co/Wkpd78jGU6

Tshepi Vundla shouldn't have apologized cos they will still find ways to make it look like she is being fake forgetting that we all have been mean and stupid at some point here when we were young on socials. I'm not even the same person I was last night.

Day in day out men are dragged for being broke. Women pride themselves in never wanting to build a man but rather date a married one.However when women tell men not to date broke huns its bullets of insults. The double standards we have as women is beyond earth really.
Tshepi😔 pic.twitter.com/Uyjt9rs13n

“This Is A Serious Matter”