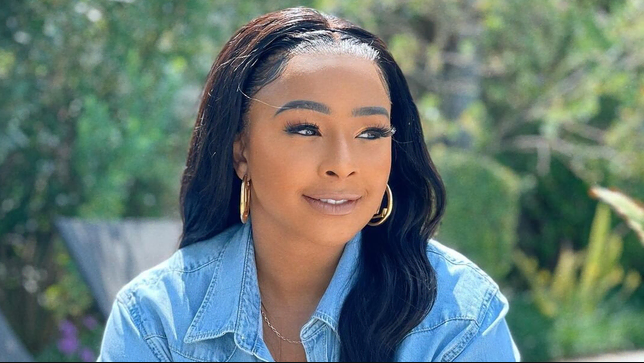 Many local celebrities including DJ Zinhle and Mihlali Ndamase have publicly shown their support for Boity Thulo after the news broke about her physical altercation with Bujy Bikwa.

Last week news reports revealed that Boity and Bujy had a physical altercation at a hotel in Johannesburg, with the “Bakae” rapper confirming that she was assaulted and revealed that she had opened a case with the police following the incident.

Since then both parties have released statements regarding the incident along with audio files being released.

While Bujy initially released a statement on Thursday, it seems that he retracted his initial one removing it from his Instagram page and sharing an updated one on his Instagram Stories.

The statement reads: “I would like to acknowledge the unfortunate incident that occurred on Wednesday, 29 September 2021 at Midrand Courtyard Hotel between myself and the said complainant.

“The incident was captured on audio and video that was widely shared on social media.

“What was meant to be a night full of fun turned into an altercation and I would like to apologise to everyone for my reaction in the situation.

“I regret that it happened and also accept the occurrence as unacceptable behaviour, and I could have handled the situation differently and not have it escalate to the levels it has from either myself or the said complainant.

“I do not condone any acts of violence by any person, including myself.

“However, I would like to not comment much going forward as the matter is now sub judice.

“Therefore, I would not want to jeopardise the working of the justice system by going into further details, compromising witnesses and getting into the merits of the case as those will be ventilated in court.

“Even with the presence of overwhelming evidence, it is still allegations, and everyone has the right to be presumed innocent until proven guilty.

“During these difficult and trying times, I humbly request that I am granted the opportunity to resolve this matter privately as I await the courts to make a determination.

“I have put the ’Queer Way of Life with Bujy’ podcast on hold until further notice.

“I also reserve further comment on this matter on this platform. Thanking you.” 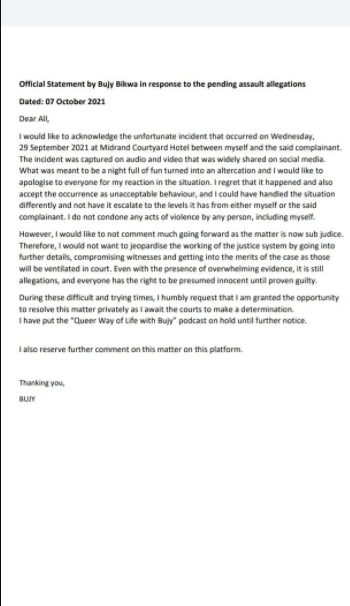