Mzansi’s favourite IT couple is going through an exciting and also precious yet daunting time in their relationship but they are loving every bit of it. It seems as though Murdah has it worse than his bae DJ Zinhle and she revealed to TshisaLive why she says so.

DJ Zinhle announced last week that she and her lover Murdah Bongz, real name Bongani Mohosana, are going to be parents. This will all be documented on her upcoming reality show DJ Zinhle: The Unexpected.

The couple who has been dating for well over a year already have children of their own and this will be their first together. According to Africa’s number 1 DJ, Bongani has been experiencing all the pregnancy symptoms she experienced but he has it worse than her.

She told the publication of the hilarious pregnancy symptoms he experienced saying he has gone through all of them, “The one thing to note about Bongani in the pregnancy is that he’s gone through all the phases that anyone could go through in pregnancy. He had morning sickness, he’s been sleeping a lot, his back has been killing him. I experienced those things a little bit but he was the one throwing up and all of that,” she revealed.

Another interesting revelation Zinhle made on the interview is that she will not be having anymore children. She already has a baby girl named Kairo Forbes with rapper AKA. This will be her second and according to her, the last pregnancy. She told the publication that making a baby is a very lengthy experience, “This is the last one. That’s for sure. It just takes so long to make a baby. If it took a shorter period maybe I’d have another one but I think I’m done. This is it for me.” 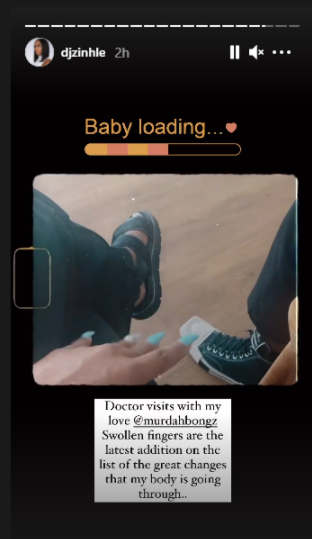 Zinhle did a very good job with hiding her pregnancy but on IG live she breathed a huge sigh of relief that she does not have to hide her pregnancy anymore. “I’m glad I don’t have to do this and hide my tummy all the time,” she laughed with her followers, whilst caressing her belly gently.

Although Zinhle said this is her last pregnancy, that does not rule out the possibility of having more children. If she takes her besties footsteps, Pearl Thusi, adoption might just be the route for her.

Pearl Thusi is reportedly in the process of adopting her second child, making her a mother of three children. Sunday World reported that Mama Panther is looking to adopt a child who comes from a poverty stricken background with a mother who reportedly battled drug addiction.

In the court papers seen by the publication, Pearl revealed that she is in a loving relationship with a billionaire and are apparently set to walk down the aisle.

Shaun Keith Alfred Bonett is a 50-year-old businessman who is the CEO of Precision Group and the man who stole Pearl’s heart and has accepted her children as his own.

Connie Shares Wisdom For Those Who Have Lost Loved Ones