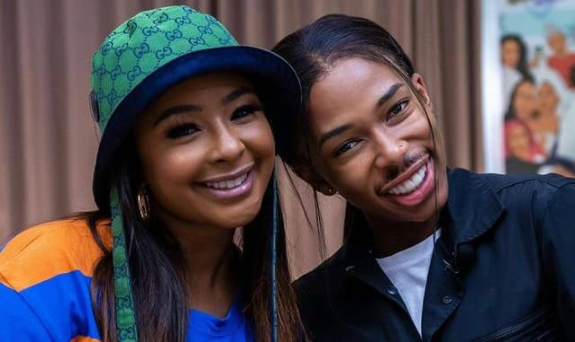 South African television and radio personality Lasizwe Dambuza announced yesterday that the first season of his successful YouTube show Drink or Tell The Truth has come to an end. In the season finale, which featured Nandi Madida, Dambuza revealed that it was the last episode.

He did not confirm when the new season would be coming out and that had viewers worried as they’ve been entertained by the tell-all show.

“The Gorgeous Nandi!!! Wow, We are gorgeous! Nandi Madida, It’s the SEASON FINALE. See you at 18:00 for Drink Or Tell The Truth.” He posted.

Taking to Lasizwe’s comment section, Nandi commended him on being such a powerful force but yet a shady human being.

“You’re such a force! Congrats! I had so much fun with my favourite shady human being. No, but seriously continue to soar! What a great season. And if there’s anyone I would go under the bus for, it’s you. Sending you, your team abs your incredible viewers so much love! Congrats @lasizwe,” she wrote.

Nandi’s episode on Drink Or Tell The Truth was an entertaining one – a lot of tea was spilt. The host was put on the spot when he was asked about the embarrassing incident that happened in 2018. His older sister, Khanyi Mbau had exposed him for lying about buying a house on social media.

“In 2018. If your sister didn’t call you out about not buying a house, would you have come out clean?” Asked Madida.

Looking back, he did reveal that he is happy that his sister called him out as the situation could’ve gotten worse. If Khanyi did not expose him, he might have been exposed by the media.

“Okay, to be honest, if Khanyi didn’t call me out, (laughs). But lesson learnt, for me. You know journalists, they investigate and it would’ve spiralled out of control and I’d look way worse. Thank you so much for calling me out.” He shared.

It was not Lasizwe’s intention to lie about buying a house. He had moved into a new apartment and everyone assumed that he had purchased a house. He decided to go with the flow and ride the wave.

“Let me tell you something right. I moved into my new apartment right. And I posted from Soweto to Sandton and everyone was congratulating me on the house and I ran with it.

“And then Khanyi calls me to ask if I had bought a house. She told me to tell the truth or she’ll throw me out and she did. And we didn’t speak for a good month. We were just like not talking to each other.” He concluded.