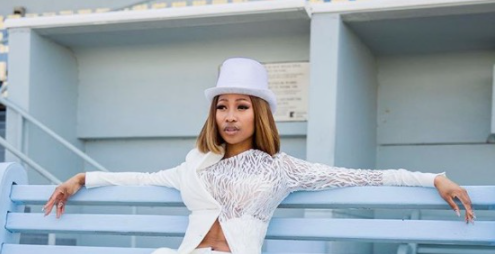 It is alleged that actress Enhle Mbali Mlotshwa has been without electricity again and this time for a week. City Press reports that the actress has once again failed to pay the electricity bill, leaving her and her family in the dark. But the actress and her mother have hit back at those “false” claims.

For a second there Mzansi was convinced that Enhle Mbali’s electricity woes continue but she and her mother know nothing about that. According to the report by the publication, sources close to the actress have revealed that her electricity was cut since last week Monday, and never returned for a week.

The first time this happened Enhle Mbali made a public spectacle out of this which prompted Black Coffee’s Twitter rant – something he does not usually do. A source said that he settled the electricity bill that time and promised her to never bail her out ever again.

The publication claims to have received comment from his family and they claim that Enhle’s lavish lifestyle has become too much for her to handle, therefore her struggles with paying the bill. The source said they are co-parenting so that means the kids spend a week at Enhle house and the following week at Black Coffee’s house, so they have equal responsibilities when it comes to paying bills.

“Black Coffee’s family heard about the situation through others. He isn’t obliged to pay the electricity bill because, in terms of their parenting plan, each of them spends equal time with the children and therefore should take care of them equally,” she said.

His side of the family then adds that Enhle needs to cut down on her spending because she is apparently struggling to maintain her lifestyle since separating from her ex-husband, “It looks as if Mbali can’t maintain the kind of lifestyle she used to have with Black Coffee, but she’s refusing to let go. The family has advised her to downsize many times, but she just won’t listen. That house is very big, she currently doesn’t have a stable job and the money she receives every month is just a drop in the ocean when it comes to covering expenses.”

Hitting back at these claims was Enhle Mbali but she did so before the story got published. On her Instagram stories, Enhle claims that the publication is stalking her as they allegedly went to her home and found that there was nobody and that there seem to have been a blackout.

Enhle went on a trip to Durban with her kids for a week, which was by the time she received the call. “I just came back from a trip right and I got a call from the publication, City Press, and they have been saying they have been roaming around my house the whole week, and noticed there was no one home or there was a black out. Is that legal, is that not stalking, What do you guys think I should do?” she asked.

When the publication asked for her comment she told them she was on vacation with her children saying that this electricity issue is now a joke. “Let’s see how you guys perpetuate the system of patriarchy,” she said in part.

Her mother also hit back at these claims saying they are not true. 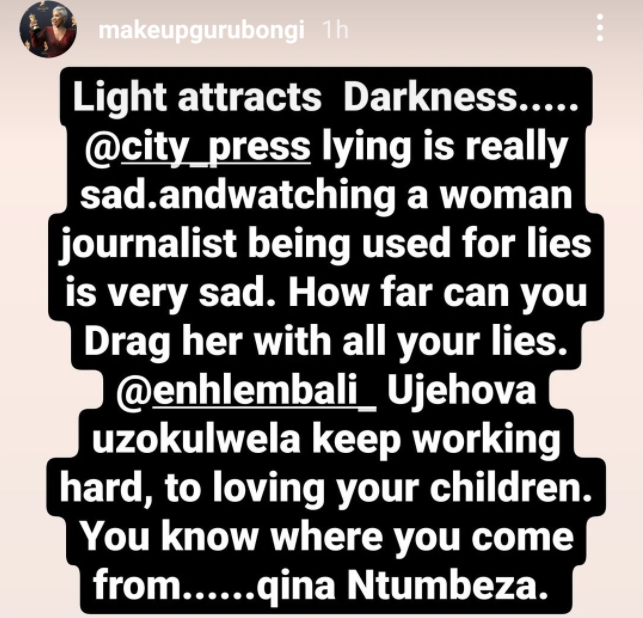 Shudu Missing Love Of Her Life