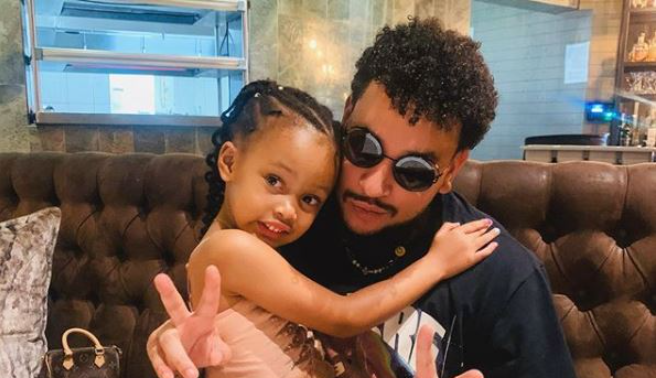 AKA and Kairo Forbes are serving the best father-daughter goals on social media. The duo rocked the same hair-do on some ‘who rocked it best’ and ‘twinning’ vibes.

The bubbly 6-year-old who has a large Instagram following posted a picture of both her and her father rocking braids.

The two have been spending some ample time together and we love it. This was during his mourning hiatus where he decided to step away from the spotlight. On her birthday, he spoiled his princess rotten with a Queen Of Hearts themed birthday party. He spent the entire day with her and he also gifted her beautiful diamond earrings.

They also spent Father’s Day together but the day was bitter sweet for the rapper. He took to IG to sympathise with Anele Tembe’s father and said he could not imagine what it’s like losing a daughter. “Fathers Day was very difficult for me. Difficult because as much as I have lost you, as a father I cannot even imagine what it feels like to lose a child, especially someone as amazing as you. This is the last picture I took of you, and this is how I choose to remember you. I pray for your family every single day, as I do for mine. We miss you so much Anele. So so much. Everything reminds me of you,” he wrote on IG.

Anele Tembe died after jumping from the 10th floor at a Cape Town hotel. She was reportedly suicidal and had decided to take her own life that day. She and AKA had apparently been arguing since they got there but that fight was probably the last straw for her.

Soon Kairo might be getting a baby brother or sister as her mother DJ Zinhle is expecting.

According to Sunday World, Zinhle was 6 months pregnant at the time the story got leaked. “She has been hiding her baby bump for an impressive six months despite attending numerous public events. She wears loose-fitting clothes,” one source told the publication.

Murdah Bongz, real name Bongani is also set to pay lobola for Zinhle but all of that would be documented on their upcoming documentary.

“I think most details will be revealed in the docu-series they are shooting. They are going to officially tell her family, though most of Zinhle’s family members and friends have met him and like him already,” said the source.

“She seems very happy and very excited about becoming a mother again. She looks great, she looks healthy, she’s glowing.

This will be their first child together, but Bongz also has a child of his own. “Bongani is taking very good care of her, something she did not experience in her previous pregnancy. Bongani is answering to her every whim. He will make a great dad. He loves kids,” another source revealed.