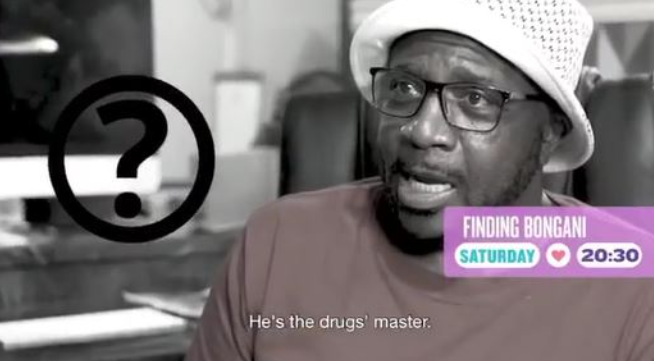 A lot of accusations were thrown around in last night’s episode of Finding Bongani Fassie.

Muthaland Entertainment owner Lance Stehr was accused by Bongani Fassie of giving him his first cocaine snot. To this, Lance said that if he did that, does that mean he also supplies Ntando, Vusi Nova and everyone else he works with, with drugs?

Bongani was adamant that the music producer gave him access to drugs when things got too much for him. Brenda Fassie’s veteran pop singer friend Mercy Pakela said that Lance feeds the people he works with drugs so that they cannot think straight and make sound decisions.

“He is the drug’s master. He feeds the children drugs so that they don’t think straight,” said Mercy.

Lance and Bongani let the fans in on what really happened with the group Jozi that South Africa loved so much. Bongani said that he was kicked out of the group because he was asking a lot of questions about his mother’s money. Lance on the other hand said Bongani decided that he was the group and thought that the group needed him to succeed so he left the group.

Lance agreed that part of the reason Bongani left Jozi was because of the many unanswered questions about his mother’s money which Lance says he was never involved with Brenda to begin with so there’s no way he could have taken Brenda’s money when she was signed to a different record label.

Chico was not spared from the allegations. He is accused of taking Brenda’s money and not giving Bongani a cent from it because he was young and knew nothing about handling his mom’s estate.

Chico defended himself and said that he is the one that bought Brenda the house in Buccleuch, Sandton and then raised about 10 million (which ended up becoming 13 million) to help maintain Bongani’s lifestyle but because Bongani had people whispering in his ear telling him that he can get close to 100 million because his mom was big, Bongani decided to take Chico and the other people that helped raise the money for him to court.

Bongani is said to have hired lawyers that were supposed to help him with his case. The case was not successful and after cleaning Bongani out of almost 9 million, the lawyers dropped him and then told him he needed to find other lawyers.

Chico said that when the lawyers had cleaned him out, Bongani was only left with 1 million rands and that was not enough to sustain all the properties he had so he ended up having to sell most of the properties his mom had.

Bongani on the other hand opened up and said that his mom had dogs she had given the names of the people who had wronged her and one of those dogs was Chico. It seems Brenda and Chico did not see eye to eye on a lot of things.

Tweeps had a lot to say about this. These were some of their reactions:

Which lawyer handled Brenda’s estate, can’t they revisit how it was distributed, trust me looters will be known #FindingBonganiFassie

Brenda protected is son in spirit, He was not suppose to see this day to tell the story.Pray and Protect him #FindingBonganiFassie

Single moms, please have wills. Detail every little thing. Be specific about boarding schools, residences, monthly allowances and appoint guardians. Absa did one for me for free. We owe our kids that much. #FindingBonganiFassie

After watching the recent episode of #FindingBonganiFassie

I dont know ….but I believed it when Sello sai there was R13 million raised from Brenda's royalties and instead of taking the R13 mill Bongani was ill-advised by Lance and the laywers who concinced him to want more https://t.co/TvXrtSc6zM

#FindingBonganiFassie Nathi on behind the Label show alleged that L*nce offered him drugs when he dismissed his offer he tried to convince him that he needs them.. now Bongani is also saying the same thing about L*nce camt both be lying abt this man

I believe Chicco in this case, coz yhoooo Estate Lawyers are the WORST!!!!!! They will literally try and suck your inheritance money dry!!! 😖😖😖 #FindingBonganiFassie

In conclusion certain people took vulnerability of an orphan. His mother was a star and they knew she had left a lot of cash for her son. Circumstances made Bongani fassie who he is today.#FindingBonganiFassie

TNS Opens Up About The Tragic Passing Of His Loved One