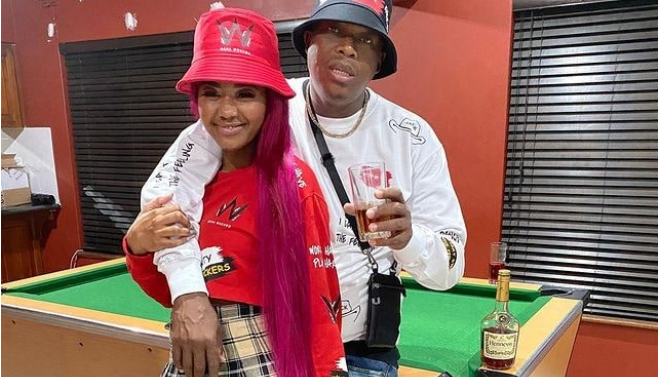 Mama ka Spontshi and Baba ka Spontshi are turning their lemons into lemonade. Usually when a baby is born after some time, people give that baby a nickname. However with Babes and Mampintsha’s baby boy, he got nicknamed way before it was announced that he even exists.

Shimaora’s mother went on a rant after Babes and Mampintsha did not invite her to their wedding. The distraught mother claimed that Babes was not pregnant and that she used a sponge to fake her pregnancy. That’s when the couple decided to mock Zama Gumede by naming their baby Spontshi, which is the isiZulu version of sponge.

The couple welcomed their baby boy on June 16, shortly after tying the knot in a traditional Zulu wedding.

Now, uSpontshi Wodumo has his very own Instagram page. As per the growing celebrity culture of having Instagram pages for their kids, he is the latest and possibly the youngest baby on IG thus far.

Mampintsha posted a picture of him holding their baby and captioned it “For all the things my hands have held, the best by far is you @sponge_wodumo.” Sponge responded and said “Thanks Dad.” 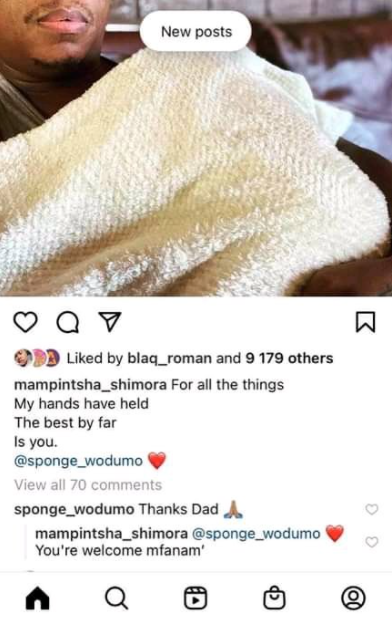 After her rant Babes slammed her and said she is pregnant whether she likes it or not. Babes told Daily News that she would be pressing charges “I am going to press charges against her for humiliating me in public and for swearing at me. I don’t understand why she is dragging my name in the mud,” a livid Babes said.

Apparently Babes is six months pregnant but Shimora’s mother refuses to believe that. Responding to claims that there is no baby she said, “I am pregnant, whether she likes it or not. If she has problems with it, she must deal with it. I am hurt about this. I know most of the things she says when she is drunk should not be taken seriously, but this time she has gone too far. I am going to press charges against her. I want her to clear my name.”

In a recent post, Babes gushed over her baby daddy for his first father’s day, “If I were to start where we started off, I’d take the whole day. Mashimane we have had our challenges left right and center but we always win. All I can say I wouldn’t ask for any partner besides you. You showed when a man commits to change kubanjalo the promise you have made. I sit and just stare at you in awe and marvel over God’s creation.

“People see how you are excited about uspontshi (our son), they don’t know how eagerly we waited for him. You are an amazing father who is 100% supportive and the love you give me shocks me every time. Happy birthday Zikode mnyeni wami 2021 has brought 2 blessings(marrying the love of my life and giving birth to our little boy,” she wrote on IG.