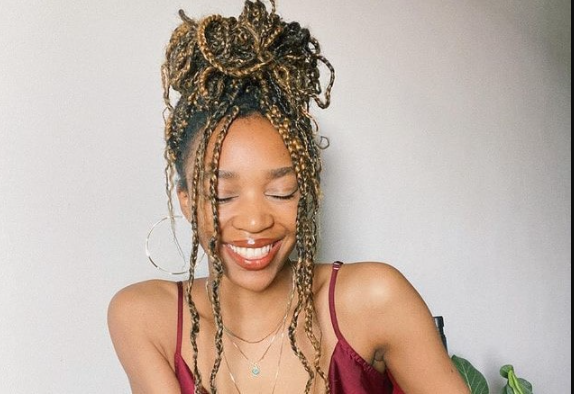 Blood and Water break out star Khosi Ngema made a serious impact on everybody who is a fan of the African teen crime drama Netflix series. But Khosi’s biggest fan happens to be American actress Gabrielle Union.

Gabriel Union decided to make Khosi Ngema her Woman Crush Wednesday and applauded the rising star for her impeccable acting skills. Gabrielle encouraged her fans to indulge in Blood And Water, telling them to hurry it up because season two has just premiered.

“Khosi is only 21 years old and is already killing the game. Not only does her natural skill as an actress shine through on the show, but also this young woman does it all! When she’s not stunning on Blood & Water, she’s STUNTING as a model and singer.

“Her passion for the arts quickly motivated her to break into the industry so much so, that when she landed the role for Blood & Water, she quickly moved from her hometown in Gauteng, South Africa to Cape Town to start filming,” Gabrielle wrote.

Gabrielle also noted how Fikile is an advocate for self care and beauty as well as eating healthy. ” Let us lift her up in the light of goodness and hold her there,” encouraged Gabrielle.

Khosi Ngema thanked Gabrielle and informed her that she is a huge inspiration, “Thank you so much for the love Queen. You inspire me.”

Her father, Mangaliso Ngema reiterated Gabrielle’s sentiments of his child being the multitalented young woman she is, “Feeling so emotional seeing this twitter post by the great @gabunion raving about my daughter @khosingema. She is indeed a very talented child and the world hasn’t seen half of it.”

When Blood and Water first came out, it made a huge impact on the charts globally. Mangaliso Ngema gushed over his daughter and mentioned how their careers are taking off, “The star is rising fast for these young thespians.” He wishes his daughter nothing but the best, “I pray that the Universe grants her all her desires and more. It is true that your first child redefines your understanding of what love is.”

Khosi Ngema not only acts but she can sing as well. Speaking to ZAlebs, Khosi said she initially wanted to play Pulent but she got the role of Fikile instead.

“My audition process was quite standard. My agency sent me the casting details, initially, I was sent to audition for Puleng, and when they called me back Nosipho the Director, told me that I should try the character of Fikile because there was something she liked and I changed. When I auditioned for Fikile, I was like wow I really messed it up, I was not confident at all, but I guess they liked what I did. My mind was blown away when they called me that I got the role, I literally ran around the house screaming,” she said.

Khosi said her father never spoon-fed her anything and she had to work hard for getting her role, “My dad has always been supportive of us and my family mostly are creators so growing up and watching him on TV was amazing. I also had my own passion for acting from a young age, but just having him being so supportive honestly it is such a blessing. He also gave room to figure things out in my own way and he doesn’t spoon-feed me, but when I do go to him for a piece of advice he gives me” she said.