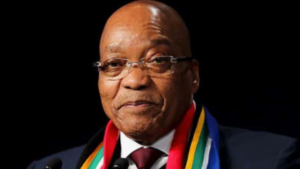 South Africans have taken to their social media platforms to wish the former president Jacob Zuma a speedy recovery.

A few days ago The Department of Correctional Services announced that the former president has been admitted to a hospital for medical observation.

The JGZuma Foundation also tweeted: “The Foundation confirms the statement by Correctional Services that indeed H.E President Zuma is in Hospital outside the prison. The 79-year-old, 1st prisoner of the ConCourt, jailed without trial is attending his annual medical routine check-up. No need to be alarmed,…yet.”

The Foundation confirms the statement by Correctional Services that indeed H.E President Zuma is in Hospital outside the prison.
The 79 year old, 1st prisoner of the ConCourt, jailed without trial is attending to his annual medical routine check up. No need to be alarmed,…yet.

You are in our Hearts and we pray for your recovery and redemption 💞Nxamalala 🙌🏽#GetWellPresZuma pic.twitter.com/PXN7E7EQvn

TONIGHT | Prayer for President Zuma eThekwini this evening; details to be provided to regional leaders

Only his supporters and all those who have been praying and seeking justice for him are invited. KZN Provincial leadership requested NOT to attend #GetWellPresZuma pic.twitter.com/B9HkPPu8p3

Our thoughts are with and your family at this time of injustice & illness ❤️‍🩹 pic.twitter.com/oZ2hRiOSto

Her letter read: “Dear Former President Jacob Zuma, This isn’t the South Africa I remember and that millions of South African’s fought for. The South Africa that overcame Apartheid, showed the world that change was possible. Led the battle in the fight against HIV/AIDS and has weathered countless efforts to undermine the new South Africa.

“I have watched how over the last few years you have protested your innocence at the allegations tabled against you of corruption and allowing mass State Capture. I have seen you got out of your way to avoid having to deal with these matters in court and avoid a commission set up to investigate State Capture. You have talked of the rule of law and the South African constitution being something that should apply to everyone. Yet you defied the courts and were sentenced to 15 months in prison.”

“Now upon your incarceration, a group of protests under the #Freezuma banner broke out igniting the worst violence and criminality South Africa has seen since the end of apartheid. These actions not only saw hundreds lose their lives and property be destroyed. But its effects will now be felt by many millions more. This affects the millions of hard-working and peaceful South Africans many of whom have suffered over the last year because of Covid.

“Each day you defy the courts and stoke division you take a step backward from Madiba’s vision for South Africa to prosper and for their not only be equitable political justice but also economic justice. If you still consider yourself a leader then please act and take responsibility like one. Agree to finish your appearance in front of the State Capture commission and equally you will have your days in court to contest the corruption charges alleged against you. . . Put the Nation first PEACE IN SOUTHAFRICA #NAOMIAFRICA.”