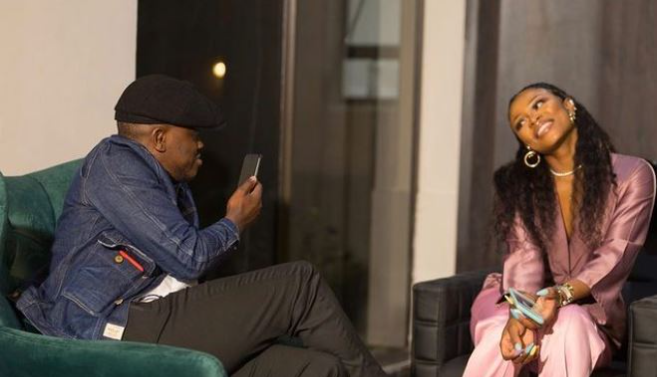 DJ Zinhle and her bae, rumoured soon-to-be baby daddy Murdah Bongz, are just the cutest and unexpected ZAleb couples. They kept their relationship very quiet and we only got to know about it when sources anonymously contacted blogs. They also have been very quiet about their love life and their romance, leaving us to wonder just how they started hitting it off.

We had so many questions including; did Zinhle make the first move like how we have seen a few female ZAlebs admit to doing so? Did Murdah hit her up in her DMs? Has he met Kairo yet? So many but thanks to her Instagram QnA, we now know a portion of their relationship – how it started.

Zinhle was engaging with her fans when she asked them “What do you wanna know?” A curios follower asked “how did Bongani show you that he likes you?”

The answer is the sweetest; Bongani, Murdah Bongz’ real name, swept Zinhle under her feet by sampling an old letter she wrote to her father just after he died in 2010. Bongani found it in her old collection and then made a new record from her old songs.

“I found a vinyl record from my old collection, on the cover was a letter I wrote to my dad after he died in 2010. I don’t even remember writing that letter but I was super emotional when I found it. Bongani took the record, sampled it and made a song for me,” she shared. 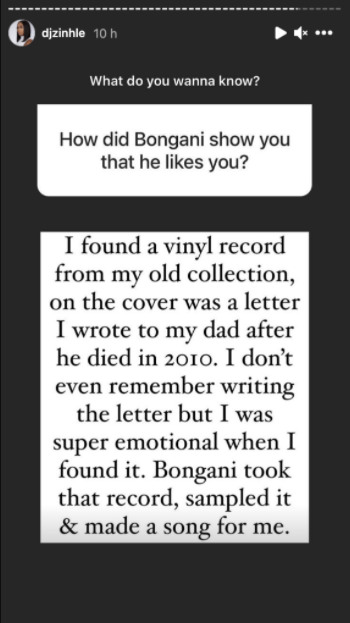 Zinhle and Bongani are rumoured to become parents to their first child together and also rumoured to be headed down the aisle. Several sources have revealed to Sunday World that their baby is due to arrive in a matter of 2 – 3 months, at the time.

“She has been hiding her baby bump for an impressive six months despite attending numerous public events. She wears loose-fitting clothes,” one source told the publication.

Another revealed that they will be documenting their story in a documentary and that their friends and families get along. “I think most details will be revealed in the docu-series they are shooting. They are going to officially tell her family, though most of Zinhle’s family members and friends have met him and like him already,” said the source.

“She seems very happy and very excited about becoming a mother again. She looks great, she looks healthy, she’s glowing.”

Zinhle documentary might just be a reality show but the details are still very sketchy. Phil Mphela announced that Zinhle is working on a deal with Showmax to have her reality show DJ Zinhle Unexpected to be broadcast there. But the online streaming platform poured cold water to those rumours and denied having planned a reality show. If there is one, it won’t be on Showmax.

Showmax head of content Candice Fangueiro responded to Phil’s claims to TshisaLive and said, “At this stage, there are no plans for a reality show with DJ Zinhle and Showmax,” she was quoted as saying.