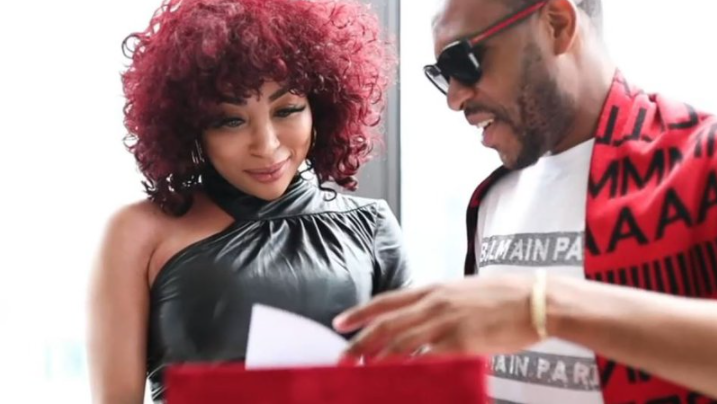 Drama, worry and panic ensued on social media after Khanyi Mbau’s bae Kudzai Terrence Mushonga said she was missing and had been searching everywhere for her. According to reports by Daily Sun, Khanyi revealed that she is safe and sound.

Media personality and her millionaire bae Kudzai Mushonga are currently on a vacation in Dubai. It’s all fun and play for Khanyi but for Mushonga he is on a business trip, whilst Khanyi spoils herself rotten. But his business stay in Dubai got shaken after he grew panicky when he realised his bae was “missing.”

Regardless of what many might make of this, Kudzai said he revealed this because should anything happen to Khanyi, her family would be after his neck looking for answers.

Making the situation worse was Lasizwe Dambuza, Khanyi’s younger brother, who took to Twitter and wrote a very sketchy tweet, which he has now deleted. Lasizwe who was busy shooting his next episode of Drink Or Tell The Truth with Norma Mngoma, said he was very scared, “I hope I am not overreacting, I’m scared.”

But when Daily Sun reached out to khanyi Mbau, they allege that she confirmed she is safe. “I am safe and sound, thank you,” Khanyi allegedly said. Lasizwe apparently did not want to comment when the publication reached out.

Terrence confused the masses when he started off by mentioning that he paid for her daughter’s school fees instead of getting straight to the point. “Imagine paying your girlfriend’s daughter’s fees before you drop her at the salon at 6 PM and she tells you, babe, I will text you 30 min before I’m done so you can come pick me up!” he said.

He then said he rushed back to their home to cook dinner but sadly nobody ate it because Khanyi was nowhere to be found.

Kudzai explained that when he posted on IG that he could not find her, Khanyi then got back to him to say she is in their building, but she still had not pitched. Making him worry even more.

He then shared a screenshot of their conversation which sees kudzai asking Khanyi where and with who did she sleep with. Khanyi then responded by saying she slept alone and only woke up at 7:30. Kudzai after “illegally losing his mind” told Khanyi that he knew her as a lady who respected her. But Khanyi calmly said that Kudzai should “take this time to think honestly and deeply” to which Kudzai responded by saying he will.

A few days ago, Khanyi gushed over Kudzai and said he ignited some love inside her. “My darling you have ignited a flame in me that was dormant and woke me up from the pit of grief I had dug myself into. Your presence in my life gave me many reasons to get up and shake of the dust and join the living again.”

We hope Khanyi posts something on social media just to let her supporters know that she is okay.