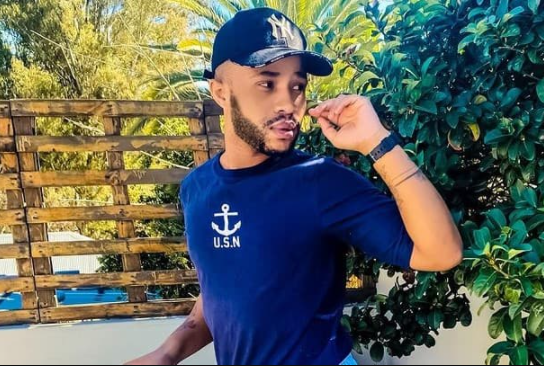 Reality show star Inno Matijane has put a homophobe in his place after mocking him.

This follows after the reality show star posted a picture of himself on his Facebook account, flaunting his booty and the homophobe came for him. The homophobe replied to his post and said “Ojisetse team,” which simply translates to “You’ve made the team lose.” Angered by his comment, Inno delivered a hot clapback at the troll and we are here for it. He shared a screenshot of a DM he received from the homophobe and asked him what was he doing on his DM’s.

Inno probably left the troll feeling dizzy and speechless with his response and his fans praised him for defending himself.

Inno is not the first celebrity to give a troll a taste of their own medicine. Somizi Mhlongo has had to defend himself against homophobes on numerous occasions. He came out with guns blazing to defend his BFF Vusi Nova against trolls who questioned his sexuality. He told them to stop being obsessed with other people’s sexuality.

“Angilwi ngiyabuza (I’m not fighting, I’m asking)..what’s the obsession with other people’s sexuality…its as if the answers will improve a certain aspect of your life….or as if it makes one feel better about themselves if they out someone else….trust me he is content and I hope you are too and enjoy your life,” he clapped back.

Inno has been breaking the internet lately and we love to see it. The openly gay TV personality really knows how to embrace his body. He leaves many drooling every time he shares a picture.

Inno rose to superstardom on the Moja Love reality show The Way Ngingakhona and he has become a household name with a legion of fans. A few weeks ago, he announced that he will no longer be part of the popular reality show.

He tweeted: “And that was my last episode of me signing out on #TheWayNgingakhona see you at the reunion for my last appearance on the show. It’s been a long journey, but my time has ended. Don’t stop telling Queer stories, we matter. Decided to leave. Thank you for loving me.”

He told Daily Sun that he will be venturing into other things including his new business. He also told the publication that, given a chance, he will do another reality show.

“It’s just time to do move on to the things that I have always wanted to do, like acting, radio, and TV presenting. Everything has its expiry date and it’s important to learn when to walk away from something…

“I will be focusing on my music and I am launching a cosmetic line. I am now focusing on my entrepreneurial skills. It seems like a lot at once but I believe I am limitless.”

Faith Nketsi Is Back In Studio