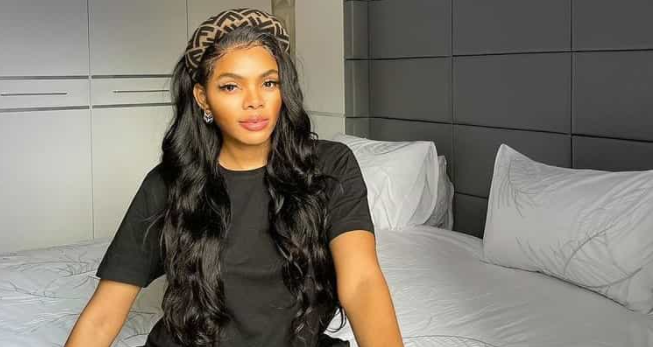 Singer/songwriter Londie London is loving motherhood and has been sharing almost every moment of her new journey on social media. This morning, Umi’s mom was treated to a fancy breakfast in bed by her husband and some pricey Dior gifts. Just the other day, he bought her Fendi earrings and judging by her response – she is loving them.

Londie’s followers have been fortunate enough to get glimpses from her new home. From the modern designs and classy furniture to the driveway that looks like a sports car dealership in the North of Johannesburg.

Londie London appears happier than ever now since becoming a mom and a wife. Her partner, Hlubi Nkosi paid lobola toward the end of 2020. This came after reports that the two had broken up after he allegedly started going out with Kim Kholiwe. Some publications, however, claimed that the two worked out their differences and got back together.

London, who gained popularity n Instagram admitted in an interview with People Magazine back in 2018 that in the early stages of her career, people were more driven to her body than her singing.

“I initially started my Instagram to post videos of myself singing and people were more drawn to the images that I was posting and I went with that and built a fan base for myself to do whatever. Even if it be a salon or a clothing line. It’s going to work for me in the long run anyway.” Shared the Ambitiouz Entertainment singer

“So Ambitiouz Ambitiouz Entertainment contacted me to do a music video and in the middle of the meeting. Cause I was in the studio – they found me there – so there were like what are you doing here, can you even sing? And I’m like yeah – I sing actually. They didn’t believe me and I had to send them my stuff and after the next meeting they signed me as an artist.”

In the same interview, she revealed that she was forced to sing when she was young and that’s when she developed a love for the art.

“Because I had that squeaky voice when I was young I used to be forced to sing soprano every time and I thought I couldn’t sing because they were like my voice was not doing the things. I grew up with the singing sisters and the cousins. Eventually, it grew in me and I realized that I don’t actually sing like them. Cause they sing gospel and I’m more like a soul singer. So when I grew older I entered singing competitions. I did UJ Idols when I was at UJ I was the runner-up winner. I used to change the school anthem into an Alicia Keys melody. I was just that kid that wanted to sing every time,” she said.