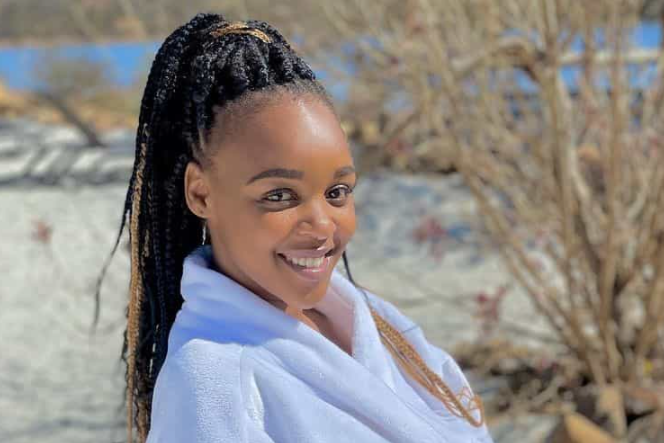 Mbalenhle Mavimbela, who stars as Nothile Mavimnela in the SABC 1 educational drama Skeem Saam has taken the country by storm. The actress has come in the fold following the questionable passing of one Fanie Maserumula.

Nothile first won the heart of Lehasa Maphosa who could not stop looking at her. We could all see that Maphosa had fallen in love and wanted more than a business relationship. However, that was short-lived after he found out that she was questioning Chef Kgosi about the passing of Fanie Maserumala. After they retrieved her diary from the Café Rovhuwa stuff, Lehasa found news clips of the passing of Fanie. This made him even more uneasy and he has every reason to be. Remember Lehasa is the one who took Fanie Maserumula’s life to save himself.

She Lost Her Grandmother

In an article shared by The South African blog, the South African. The actress revealed that she lost her grandmother two days before she made her Skeem Saam debut.

The talented actress has also starred in Isipho. She played the role of Tandzile.

Mbalenhle has starred in the first season of Durban Gen, which Cedric Fourie also stars in. She starred as a negotiator in the seventh season of Isibaya.

The actress revealed to Drum Magazine that she studied travel and tourism as she could not afford to go to drama school.

Opening about her grandmother’s passing on social media, the actress said that it felt as if she had felt her other half.

“I have lost the love of my life! Heh…God is truly alive, and I respect him because he does things the way he wants to. Not only did I lose a gogo, but I lost my other half. Gogo just when I was about to do big things for you … she passed on a message on the day of her death saying she loves me.” She said in part.

She adds that she has no choice but to be strong and that her gogo left her with the word of God.

“I don’t even know what to say … all I know is that I have to be strong especially because of all her last words that showed how much she believed in me. I wouldn’t be alive today if it wasn’t for gogo’s prayers. I am who I am today because of my gogo, I was raised by the strongest woman I know. Gogo I wish you waited one more month I wanted to book you a flight so I can see the joy of having to fly for the first time. One thing I know you left me with is the word of God and I will find comfort in him …I remember you saying ufuna ukushonela esontweni and that’s exactly what happened.