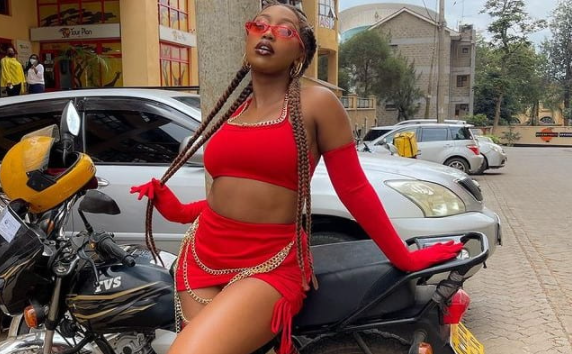 Dancer Kamo Mphela has debunked ongoing rumours of her being pregnant. A livid Kamo Mphela posted on her Instagram Stories that she is not expecting so she wishes people could just fall back with the rumours.

Kamo is currently living it up in Accra, Ghana with her squad and they look like they are having an epic time. She has been posting some sizzling content on her trip but fans could not help but notice her weight gain.

Many relate sudden weight gain to pregnancy but Kamo refuted those claims and said she has just gained weight, nothing major.

“Guys, I am not pregnant. Everybody is like, ‘is Kamo pregnant?’ I’m not mother f***ing pregnant,” she shouted. “What the f***! I actually want to scream… guys no, I just gained weight,” she clarified.

Another rumour she refuted was that of having a lover in Ghana hence her extended stay in the country. Of course she refuted those as well.

Kamo Mphela had to be reminded by Cassper Nyovest of the star power she possesses. In an interview with YFM’s Banques and Venom for their YouTube series, The Banques And Venom Show, Cassper Nyovest even went as far as saying American rapper Drake has the hots for her and assumed that he wanted to smash her. Even Tory Lanez follows Kamo on Instagram and Cassper thinks he checks her out everyday wishing to slide into those DM’s.

“I was even talking to Kamo Mphela the other day I said ‘You sleeping on yourself, do you know who you are?’ I’m like ‘Do you know that Drake and Tory Lanez talk to each other and say “I wanna f*** this girl?” Like I’m telling you.’ Right now the American rappers are probably looking at Kamo Mphela and are like ‘yooohh,” said Cassper.

He advised Kamo to not sleep on herself as the world is definitely watching her, adding that she is the biggest star currently.

One person who is pregnant though is entrepreneur DJ Zinhle. The star had to keep her pregnancy hush hush for a while as she wanted to wait for that special moment to reveal it. She announced the pregnancy during her reality show’s promotional video and fans were very excited.

Today was their doctor’s appointment and Zinhle complained that her fingers were also starting to gain weight. Zinhle is also happy that she gets to not hide her pregnancy anymore and she has the freedom to caress her belly properly.
“I’m glad I don’t have to do this and hide my tummy all the time,” she laughed whilst caressing it gently.

“I have a lot of mixed emotions. I’m super stressed about opening my life to people in this way because it’s something that I have never done. However, I’m also excited about the opportunity to tell my own story in my own way and let people into my life in my own way,” she revealed.

Speaking to SowetanLive DJ Zinhle expressed her excitement on welcoming her fans into her home, “I will be letting people into my life so you can see my role as a mom and businesswoman plus who I am to my family, friends and colleagues. It’s a very close and intimate look at my life.” 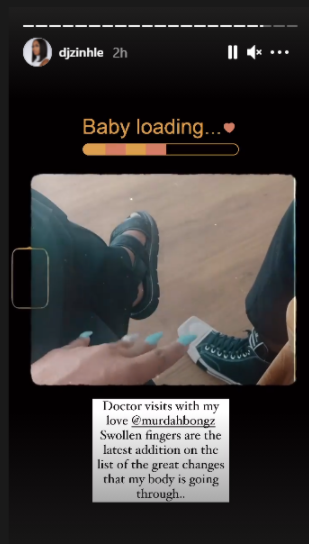 The Estate Finds A New Home