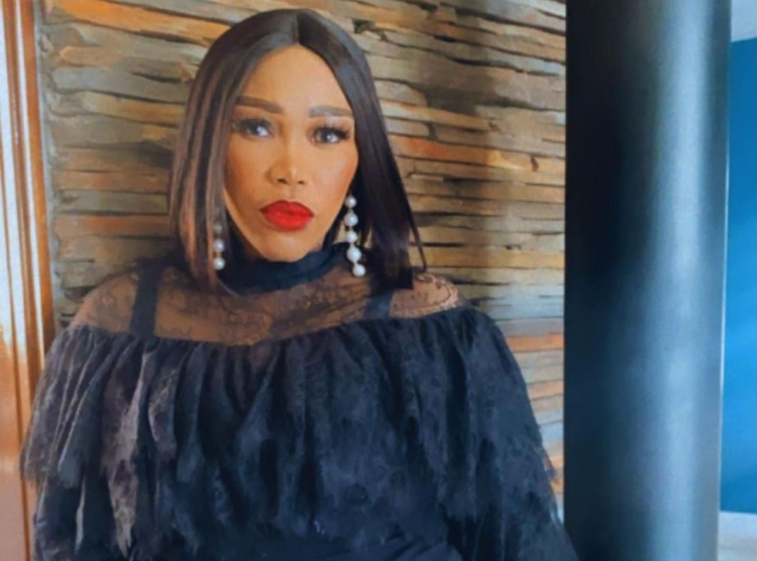 Sonia Mbele was Mac G’s recent guest on his Podcast and Chill and sis dropped gems. The actress spoke about her childhood and her upbringing, to casting in major productions and how casting directors would ask her how far is she willing to go for lead roles and of course her Generations career and whether she and the late Menzi Ngubane used to date or not.

Sonia who is a divorcee, spoke about her dating life and whether or not she is looking to get into a relationship. She said she is a very old school person who still appreciates the kind gestures from men. These include opening the door for her, massaging her feet, pulling out the chair before she sits and eye contact.

She and Mac G admitted that she might not find love because most men do not do that anymore. He then suggested that she could date someone on set since she has no time as she is always busy shooting.

Sonia said she has never dated someone she has worked with and that is when the late Menzi Ngubane’s name got brought up. She then said “No we never, not even once.” she responded. “Like to a point where we even said goodbye, we respect each other’s spaces I would not call him at home, ever.”

“There were boundaries that should not be crossed and we never crossed one single one. It was highly professional,” she said. Adding that people never believe her when she said that. She even said that when people wanted to get in contact with each other they always contacted the production team.

Well, there you have it, Sonia’s relationship with her onscreen husband was only limited to that. But her ex-husband did not quite get the memo. Sonia once revealed that he made her quit Generations because he was jealous of their relationship on the show.

Sonia was a guest on Phat Joe’s Cheeky Palate where she spoke about her marriage to lawyer Leslie Sedibe. “People have always said Sonia married for money, I’m like where? That guy earned a salary. He went to work, would take his suitcase with him, come home and then earn his salary at the end of the month. He was never a BEE or tenderpreneur, we both earned a salary.”

Sonia then broke down and almost cried as she said that their divorce was ugly.

“Who am I married to? When you wake up and then feel like ‘I love you today, but then I hate you tomorrow’ type of thing. It doesn’t make sense how it could be that ugly.

She starred on Generations from 2003 up until 2009. Her reason for quitting the show was because her relationship with onscreen husband Sibusiso Dlomo, played by Menzi Ngubane was too uncomfortable for Leslie.

Leslie then restricted her from watching the soapie and then asked her to quit. His controlling ways were too much for Sonia to handle so she then had her mother mediate to try and find common ground.

Watch her interview with MacG below:

Babes Dragged For Outfit At Her Brother In-Law’s Funeral