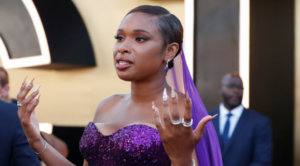 The 39-year-old singer and actress was personally chosen by the legendary star to play her in a biopic about her life and Jennifer revealed at the Los Angeles premiere of “Respect” on Sunday that she still mourns her late friend, who passed away in 2018 at the age of 76.

She told The Hollywood Reporter: “The last time I heard her voice was August 8. It’s odd that here we are again, on August 8, three years later.

“Right after we spoke, they told me she was no longer competent enough to speak but she sang to me on our call and we talked about my son and his cooking. She loves to cook and so does he. I sent her a video of him cooking. I truly miss hearing from her.”
Aretha and Jennifer first discussed Jennifer playing her in 2007 and the movie has finally came to fruition, thanks to director Liesl Tommy and screenwriter Tracey Scott Wilson.

Liesl said: “I feel so happy right now because I feel like I spent my entire career inadvertently preparing to direct this movie by working on musicals and Shakespeare, working in television.

“I got to make a movie about my hero, Aretha Franklin, with actors that I’ve admired and with Jennifer Hudson who is like a sister after we spent this time together.

“I feel so privileged and blessed. I also feel I’m at my most artistically powerful because everything I wanted for this movie is in this movie.”

They also screened the movie in Detroit, where Franklin was raised and where many of her family members still live.

Hudson said: “They took me to her childhood home and we sat on the porch and reminisced.

“When people are icons and legends, people sometimes forget that there’s a person under there with a family.

“It was good to connect with them and acknowledge that. It was a beautiful moment.”

Cassper Nyovest dragged for making Mpura’s death about himself