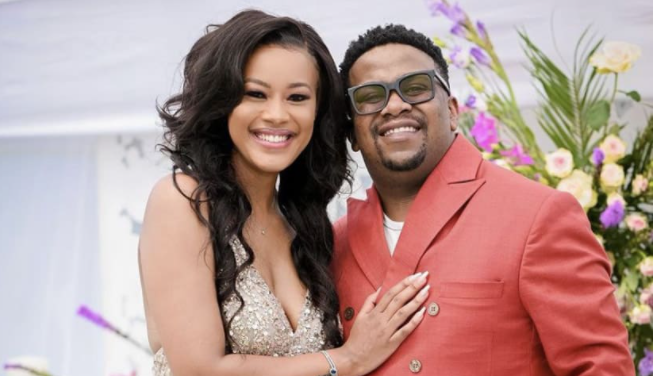 You know that couple that is the epitome of ‘couple goals’ and who have been together for a long time that we almost forget that they are yet to walk down the aisle? Musician JR and his lovely wife – oh wait, girlfriend and baby mama Tshepi Vundla are that couple. For some time now, a few people have called them hubby and wifey but the rapper clarified that he is yet to put a ring on it.

Make The Circle bigger hitmaker JR was Mac G’s recent guest on his Podcast and Chill YouTube series. On the episode, Mac G asked JR how he and his wife met, of which JR clarified that they are not married and they are only in a vat ‘n sit relationship.

Vat ‘n sit is a relationship where partners cohabitate but they are not married. Tshepi and JR are parents to a beautiful baby boy who will be turning four this year and they make the perfect family. Although they are living together without being married, the possibility of marriage is pretty high.

“I need to clarify she is not my wife yet. I think it’s very easy for guys to start dating someone for a couple of years and then start calling them their wife,” he said. Mac G then had to had to call it what it is and he said, “so it’s vat ‘n sit,” to which JR reluctantly said “yeah, it’s vat ‘n sit, it’s a loving relationship. You know what I mean, it’s a family.”

To answer Mac G’s question about how they met, JR said they met a couple of years ago where they started off on a light note. Saw each other briefly but had to separate for a while after losing contact with each other.

“Then gradually over the years we were back in each other’s circles with common friends and people. Then we said let’s see each other for a little bit, let’s see where it goes to,” he explained.

In true Mac G style, he asked JR about the night which his son Siba was conceived. JR recounted that night they done the deed saying it was December 31st and after they had welcomed the new year.

He clarified that their son was not a mistake and even though they did not plan it, it just felt like the right time to be parents.

Before meeting JR, Tshepi was in an abusive relationship with a well-known influencer. During the time where Twitter was outing abusers, Tshepi also decided to tell her story. Her hubby-to-be JR publicly backed her up and the streets were impressed.

“I’m sorry baby @tshepivundla. I’m happy you have built up the courage and have found your voice! This has now become yours and many others story to tell, we WILL be held accountable to our actions. WE believe you, WE love you and we STILL support you,” he wrote on Twitter.

I’m sorry baby @tshepivundla. I’m happy you have built up the courage and have found your voice! This has now become yours and many others story to tell, we WILL be held accountable to our actions. WE believe you, WE love you and we STILL support you. ❤️😢