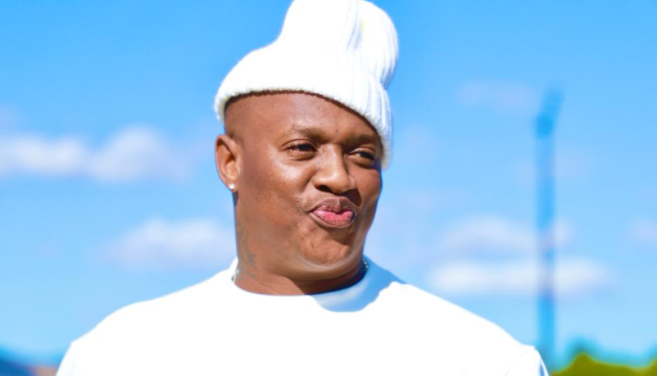 Many celebrities or people of a certain level of prominence, shy away from speaking about social injustices because they are afraid it might hurt their brands. Some, lose sponsorships or even their jobs if they lend a voice to controversial movements or social ills.

At some point Mihlali Ndamase took a stand and shamed brands who threaten to end relations all because a person spoke up the Black Lives Matter movement. Other influencers also joined in to shame these brands and we have seen it time and time again.

South Africa was recently hit with a devastating unrest which crippled the economy and brought the country to its knees. A handful of our ZAlebs spoke out but others chose to remain silent. Others chose to address the issue but bashed the looters saying they do not feel sorry for them regardless of their circumstances which lead to the looting.

Jub Jub starts by addressing his frustration at 'priviledged' blacks who think they can look their nose down at other black people.

Jub Jub was most frustrated about this and he sure made it a point to air out his frustration on Instagram. In a 30-minute long IG video, he bashed the people who are sitting comfortably in their homes with their fridges full of groceries, but are bashing the hungry looters. The rant ended badly for him because Moja Love reprimanded him for his actions and possibly choice of words.

According to Sunday World, Jub Jub’s video was seen as incitement of violence which drove people to loot even further. He did say he does not condone looting however his words, “…what did you expect to happen if they have been misled and lied to for years? Let them steal if they have to steal. Let them do whatever because the government has not provided. This was bound to happen, people are starving,” possibly fueled the fire.

Moja Love, which airs his hit show Uyajola 9/9, then released a statement to distance themselves from their employee’s rant.

The statement read: “As Moja Channels, Moja Love (DStv 157) and Moja 9.9 (DStv 158) we would like to distance ourselves from the social media video circulating of Molemo Jub Jub Maarohanye expressing his views about the ongoing protests. The views expressed in the videos or any of his platforms are his personal views and do not reflect the company values and views of the channel in any way.”

The channel says views shared by the Uyajola 9/9 host are his personal views and do not reflect Moja’s stance.

Aubrey Tau, the CEO of Moja Love reportedly lashed out at Jub Jub reprimanding him about the video. Sunday World also reports that Moja Love employees accused Jub Jub of painting the channel in a negative light.

However, the CEO and Jub Jub discussed this further and it ended with Jub Jub apologising. They have since put everything behind them.

What Jub Jub is not sorry for though is putting Lerato Kganyago ‘in her place.’ The Uyajola 9/9 host told LKG to never come for him again because he will air her dirty laundry out to dry. Lerato got so mad that he accused him of attacking her because she is a woman.

“I didn’t even say anything wrong. I just mentioned that some artists are speaking. He must khipa my files I’m ready lenna. Trying to give people an impression about me,” she commented on IG.

“Think I’m an easier target because I’m a woman! FOH! His comes from something else that he must address. But try to push a narrative about my reputation like he knows me, nah that I won’t sit down and be silent about!” 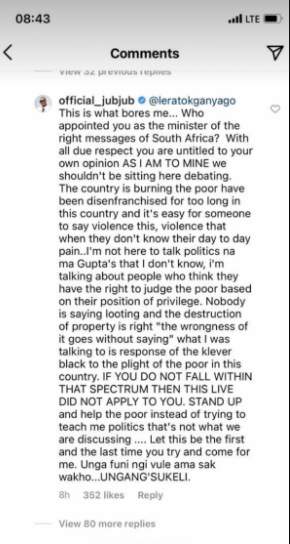