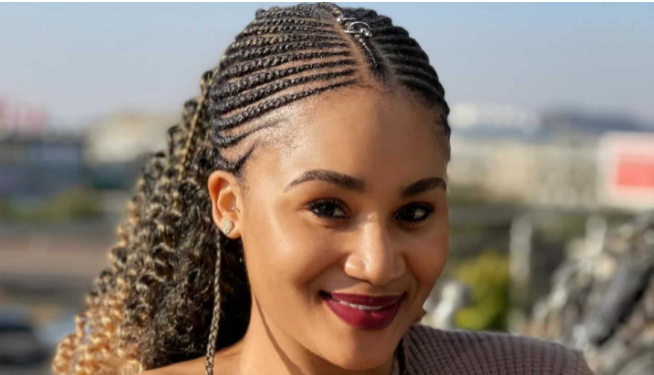 Keke Mphuthi had suffered greatly at the hands of the Fergusons leading her to go MIA for the last two years. The actress took to social media to announce her return to the small screens and is excited about it.

The actress who last spoke about how she suffered greatly at the hands of The Fergusons is set to return on TV. She shared a snap of her with veteran actor former Isidingo star Lindani Nkosi. She did not reveal the production she is working on but she has hinted that she would be playing alongside the actor.

“Dear God it’s all coming together NICELY!!!! after 2 years of failed attempts, emotional, psychological, physical trauma I FOUND MYSELF AGAIN,” she shared.

“But this time THEY NEVER SAW ME COMING or shooting with some of the most amazing people that I genuinely love n appreciate . Bab’ @nkosilindani40 I LURVS YOU.”

Her last gig was with The Fergusons and she revealed that it ended because she got fired for being pregnant. She also revealed that she almost lost her baby because of the drama which was caused by the production house.

“As I said I have a 28min recording of the meeting we had that confirmed my stay as opposed me being fired.” She wrote.

The actress then further complained that an extra on set scanned her child, but that scene was cut and she never received an apology from the production team.

“I was paid till Feb only and yet contract ends May 2019. I was so confused, highly pregnant and now a without job. After I had already gotten a new place to stay and sorting out life as my pregnancy came as a surprise,” she tweeted.

She also claimed they tried to blacklist her, “…y’all don’t even know half the trauma I went through because of the Ferguson’s ,because I was pregnant and even before then I was earning below minimum on two PRODUCTIONS I PLAYED LEAD ON… then I find out they trying to get me blacklisted,” she tweeted.

At some point Keke even blamed her unborn son for losing her job, “I’m sorry I blamed you for initially loosing my job, I didn’t know any better… I thought that’s how it was meant to be, but I look at you today and know I’d gladly go through everything again for you,” she wrote.

Through their lawyers, The Fergusons responded saying they have contacted Keke’s lawyers, “There have been other slanderous and false allegations made by Ms Dieketseng Mphuthi and Mr Katlego Malele, which are being addressed separately by our legal team,” read the statement.