Ever had that experience where if you had arrived at the hospital a minute later, something fatal would have happened? Kelebogile Megano recently opened up about her ordeal and she couldn’t be be more grateful that she survived and is feeling better now.

In vivid detail, Kelebogile said she experienced breathing problems due to allergies. She was then rushed to the hospital to seek medical attention. Describing her near-death experience she said her doctor told her that had she gotten there an hour later she would have died.

“Guys I legit almost died earlier. My Dr told me if I’d come an hour later than the time I got to the hospital I’d be head hun. My throat swelled up so hard that blocked my airway. I literally couldn’t breathe. I hate allergies but anyway happy spring I guess” 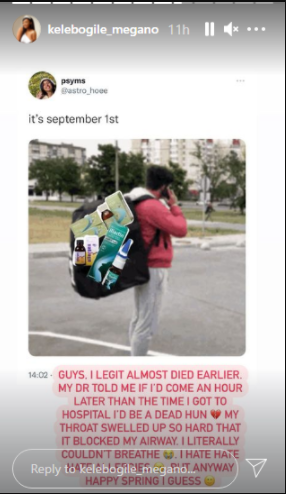 Kelebogile recently celebrated her birthday and she extended her gratitude to everyone for their unwavering support.