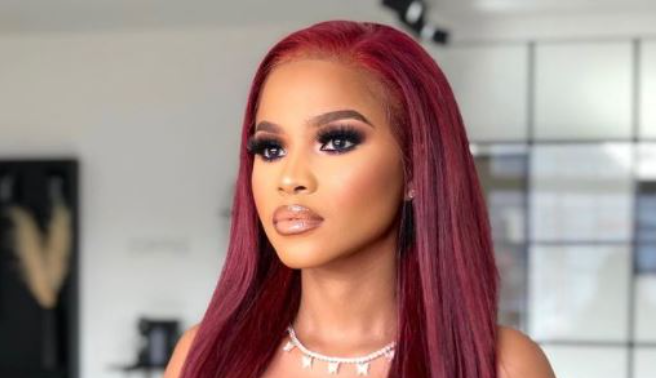 Actress and television presenter Khanya Mkangisa is the happiest mommy right now with all the love she is receiving from her bundle of joy.

Khanya took to Instagram to gush over her baby, she said, “4 months later and I’m still trying to find my feet on how to be a good (dog) mom to you but I love this picture and I love you. @princessbarbiebella 🤍

“Half an hour after we took this picture, she slipped and fell into the pool and as I was about to save her, she swam to me. 😭 it was her first time swimming. 😭❤️ she was so miserable after. 😂 She reminds me of me”

People took to the comments section to equally gush on Khanya’s baby. This is what they said:

@tembsymajija said, “You look amazing together😍😍 She was meant for you”

@bee_mayisela said, “You make me wanna be a (dog) mom too!!😍😍😍. Arg You guys look so gorgeous together!”

@iaintgod said, “As a first time doggie daddy myself…the attachment is unreal. I now like Jozi better than I like my humans”

@masemola_za said, “You both adorable 😍”

When Khanya got her baby, she took to Instagram to introduce her baby. She said, “The is probably the sweetest surprise I’ve ever received. Thank you so much to my Doll Face’s father for her, I love you both. 🤩 I’ve never owned a pet before, feel free to give me tips and pointers on the comment section.” she gushed as she introduced Barbie to her fans”

Khanya has been serving us every cute snap of herself and her baby and siyagowisha. These two are a perfect mommy and baby duo.

We love Khanya’s Instagram content but we miss her on our screens even more. The last role Khanya had was with Muvhango as the conniving Mbali. She joined the soapie last year February.

Having started off her career at the age of fourteen, she has since then been making big moves. She groomed her career as a television host before transitioning into acting.

Her career in showbiz has afforded her her enviable lifestyle with her contagious smile we all love she is conquering in all things entertainment and we are here for it. Khanya is also no stranger to being hands on deck, she recently ventured into Djying.

Another dog mom that is totally smitten with her fur babies is Boitumelo Thulo.

The Ba Kae rapper could not hide just how in love she is with her favourite poms and when she says they slay, they really slay! In a tweet she introduced her cute babies to her fans who gushed over them and asked her all sorts of questions about them, and she was willing to answer them all. Tweeps wanted to know their names, gender, age, breed and even how much they cost.

Asante and Sana are Pomeranian dogs. Pomeranian is a breed of dog of the Spitz type that is named for the Pomerania region in north-west Poland and north-east Germany in Central Europe. Classed as a toy dog breed because of its small size, the Pomeranian is descended from larger Spitz-type dogs, specifically the German Spitz.

Her cuties, Asante and Sana, are three and two years old, respectively. Asante is male while Sana is female. When it comes to price, these cute little puppies go for R6000 each – well at least that is how much Boity spent on hers, and tweeps were shook!