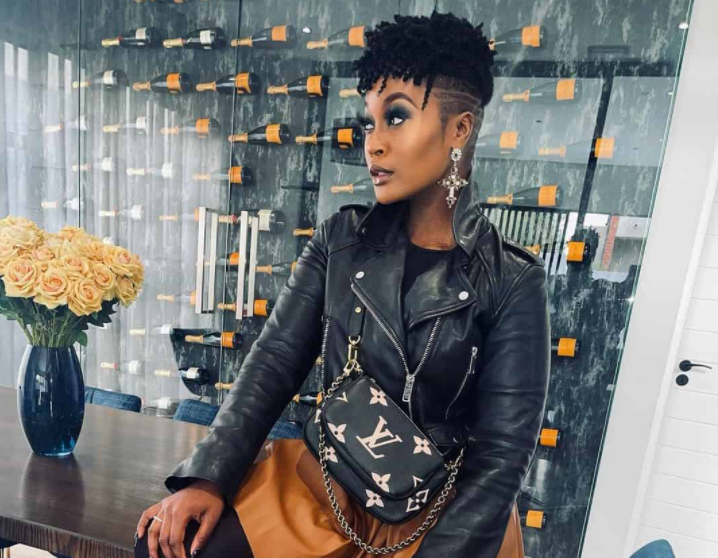 DJ Lamiez Holworthy constantly gets dragged on social media but all she ever does is mind her own business, love her husband loudly and serve the hottest fashion looks like no other. But her dress sense has been put to question by trolls and resulted in her getting body shamed. This time Khuli Chana’s wife got called a man.

Lamiez is all about serving positivity on social media. A fan of hers will attest to that, and the way she is open to uplifting other women is commendable. But she saw herself getting attacked for “looking like a man.”

A troll came for Lamiez Holworthy who was dressed in blue jeans, orange coat and black sneakers. She accessorised with a small black Dolce and Gabbana handbag and black shades. Of course her short hairdo is not going anywhere.

Lamiez saw the offensive tweet and clapped back saying she is more of a man than the troll, who was obviously male, and she is not bothered by that.

Chances are I’m more of a man than you could ever be.
I could live with that. 🙂 https://t.co/A6D1mqeVIR

Lamiez has always been attacked for just being herself. On Facebook, a troll accused her of being abusive toward Khuli Chana. Saying she is more masculine than he is.

The DJ also gets dragged for her body and she said it is mostly from women who are bigger than she is. She was responding to a woman who pointed out how women are always mean to each other. “I love sisterhood so much, but I’ve come to realize that women generally are unkind to and mistrust each other, for no apparent reason.”

Lamiez agreed with these sentiments and said, “Most of my body shaming comes from women. Most way bigger than me and I’ll just never get it.”

One incident where she got body shamed was after an episode of Live Amp where she got photographed next to Amapiano’s finest Zuma and Reece Mdlisa, as well as her former co-host DJ Speedsta.

Her thighs evidently took centre stage with woman saying they do not look appeasing as she has cellulite. “It’s firstly that fake Versace t-shirt then most importantly the fact that you are way bigger than me yet you in my comments. Why, Is it because it pains you to see me so confident and now you want to inflict your insecurities on me? What a joke,” she laughed.

Lamiez then penned a lengthy Facebook post where she said she is very comfortable with who she is. “My name is Lamiez Holworthy and this is ME in my purest form. I’ll be damned if I edit my pictures to appear tinier or to hide my cellulite or stretch mark or two.

“You know why? I am tired of women (young and old) putting themselves under unnecessary pressure because of social media and it’s fucked up standards! Imagine trying to look like someone who doesn’t even look like themselves?!” she said.

She then adds that she tries to eat right and works out once in a while but she does this for herself and nobody else. “I work out and eat right solemnly for my own well-being- not because I am trying to fit in to a box or have anyone police me! THIS IS ME- DEAL WITH IT!!!”

Lamiez was trending this weekend after a clip of her looking shocked when a woman jumped into one of her sets and started twerking. Her facial expressions where priceless.

Watch the clip below:

If you’ve watched this video. You’d know that this is what I was thinking 🤣😫