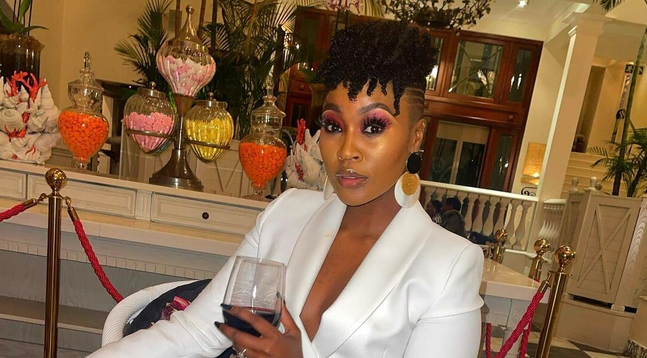 Radio personality DJ Lamiez Holworthy hit back at a Twitter troll who commented about her appearance.

Over the weekend, Lamiez shared outfit of the day pictures on Twitter, donning an orange blazer, a pair of ripped jeans, her signature big sunglasses and a Dolce & Gabbana bag, Simply captioning the post with “Saturday”.

One user decided to come for her and said: “You look like a man.”

However, she was unfazed by the troll’s attempt and clapped back at their comment and said:: “Chances are I’m more of a man than you could ever be. I could live with that.”

Chances are I’m more of a man than you could ever be.
I could live with that. 🙂 https://t.co/A6D1mqeVIR

Earlier this month, Lamiez’s spicier side came out when she added some sauce to the backlash influencer and content creator Tshepi Vundla was receiving for old tweets and comments made a podcast episode of “On The Table.”
In case you missed it, Tshepi joined the women of the “On The Table”, Tshepi Mabs, Noluthando Nkwali and DJ Black Velvet, in the season finale where they revisited topics from the previous episodes to get perspective on them.

Two clips from the podcast went viral; in one, the women discuss what women bring to the table in heterosexual relationships – specifically about women on the Twitter timeline’s regular use of sbwl (craving, desiring, yearning or wanting).

In the other clip, the Ghost Lady asks if men need to pay for a date when women put a lot of effort into their appearance. Tshepi responds, “Are you a prostitute?”

Holworthy added some fuel to the flame with a now-deleted tweet in which she said: “Someday when I have time, I’ll tell you guys how two ’influencers’ asked the brand manager on my first big campaign who I was and went on to say y’all will book just anyone’.

“Years later, one is catching smoke for talking rubbish and the other? Still can’t pinpoint what they do.”

Tshepi has since issued an apology for her old tweets and comments made on the podcast.