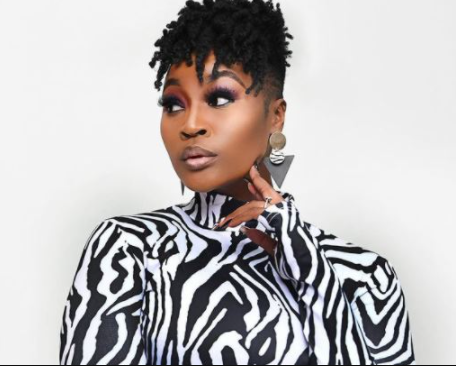 Lamiez Holworthy took to Instagram to announce that she has been working on a very special project for her fans.

Thank you @dripgogo_official and @the_lowkeys012 for helping me put together such a special piece. #sthokoze officially drops on all digital platforms this Friday 6th August”

If the name Drip Gogo sounds familiar to you that is because it is familiar. Drip Gogo real name Nhlanhla Moqhayi, was featured on an episode of Date My Family in April this year. From the get go Drip Gogo introduced himself as such and made it a point that people knew who he was.

Unlike DBN Gogo who is not a real life Sangoma, Drip Gogo is a Sangoma and has underwent the whole process of ubungoma.

The 22 year-old is a rising yanos musician that has worked with Lamiez, DJ Sumbody and Junior Taurus on his own project. Drip Gogo was featured on the Yanos track that is slowly climbing the airwaves, Iyamemeza.

Reacting to the snippet of her song, this is what people said:

@the_boujee_traveller said, “This song is fire 🔥🔥🔥🔥 can’t wait to hear it okayed across the nation Akere!”

@its_angelkay_ said, “I loved this song the moment I heard it for the first time ko mixing 🕯🕯🕯🔥🔥🔥”

@dineo_mashobane said, “I for one can’t wait to listen to this track ❤️🔥🙌God Bless aus Lamiez❤️❤️❤️”

We are definitely ready for this single. If the snippet is anything to go by, it will definitely be fire.

Almost a month ago, the DJ got body shamed after a picture of her posing with Amapiano’s finest Zuma and Reece Mdlisa, as well as her former co-host DJ Speedsta went viral. Her cellulite rubbed a female follower the wrong way and she gained the courage to shame Lamiez for it.

Lamiez came for the troll who complained about her legs, saying she wears fake clothing and is actually way bigger than her in body size. “It’s firstly that fake Versace t-shirt then most importantly the fact that you are way bigger than me yet you in my comments. Why, Is it because it pains you to see me so confident and now you want to inflict your insecurities on me? What a joke,” she laughed.

Lamiez then shared a separate post wearing the same outfit which exposed her thighs saying this is her, in her most purest form and people should just deal with it.

“My name is Lamiez Holworthy and this is ME in my purest form. I’ll be damned if I edit my pictures to appear tinier or to hide my cellulite or stretch mark or two”

Yassss Queen. We love this not just for you but for every woman that has ever had to deal with online trolls because of how they look.