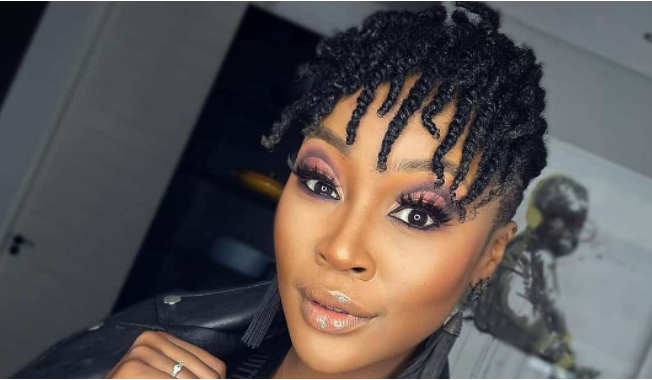 Lamiez Holworthy had to remind trolls that she loves her body and would not change a thing, no matter how uncomfortable they are. The DJ got body shamed after a picture of her posing with Amapiano’s finest Zuma and Reece Mdlisa, as well as her former co-host DJ Speedsta went viral. Her cellulite rubbed a female follower the wrong way and she gained the courage to shame Lamiez for it.

Lamiez came for the troll who complained about her legs, saying she wears fake clothing and is actually way bigger than her in body size. “It’s firstly that fake Versace t-shirt then most importantly the fact that you are way bigger than me yet you in my comments.

“Why, Is it because it pains you to see me so confident and now you want to inflict your insecurities on me? What a joke,” she laughed. 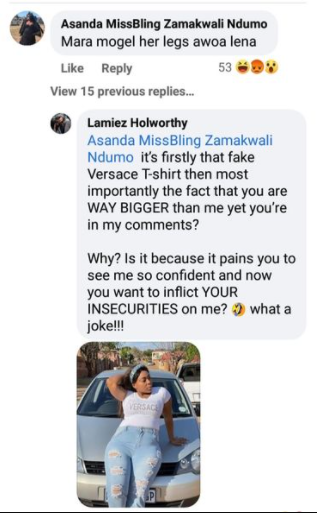 Lamiez then shared a separate post wearing the same outfit which exposed her thighs saying this is her, in her most purest form and people should just deal with it.

“My name is Lamiez Holworthy and this is ME in my purest form. I’ll be damned if I edit my pictures to appear tinier or to hide my cellulite or stretch mark or two.

“You know why? I am tired of women (young and old) putting themselves under unnecessary pressure because of social media and it’s fucked up standards! Imagine trying to look like someone who doesn’t even look like themselves?!” she said.

Lamiez added that she is a public figure who has many women looking up to her so she could not be bothered by people who troll her.

“I am a public figure with millions of followers- most of who are woman of all ages and it is my responsibility to show them that it is OKAY TO BE NORMAL and that NO ONE can use your flaws against you when you make peace with them.

“Ps. I work out and eat right solemnly for my own well-being- not because I am trying to fit in to a box or have anyone police me!
THIS IS ME- DEAL WITH IT!!!

Lamiez was heartbroken when Live Amp got cancelled as it was one of her gigs. Taking to Twitter, she paid respect to the show saying it is bigger than her, “Who would’ve thought a big girl with tattoos,crazy hair n her own style frm Pitori would be on the biggest music show in our country? When main stream media was always dominated by the opposite? Live amp will 4ever be special man- a win way bigger than me. Here’s to more wins.”

“4 years and 3 seasons later, super amped about our “last dance”. Here’s to the end of one and the beginning of so much more. From Pitori to the world,” another tweet wrote.

4 years and 3 seasons later,super amped about our “last dance”.

Here’s to the end of one and the beginning of so much more.

From Pitori to the world ❤️ https://t.co/XmMqDsRG4c

Live Amp got cancelled after 25 seasons and last week Friday was their final show. It was Lamiez’s first big gig and so seeing it go was surely emotional. She revealed to True love magazine that she was ready to throw in the towel when she got the gig in 2018.

“I was ready to give up just before I got the Live Amp gig last year. I felt like my life was spiraling out of control. I was involved in a car accident while busy with auditions. Then, a few days later, my entire DJ equipment was stolen out of my car. God showed up for me when I got that all-important call,” she said.