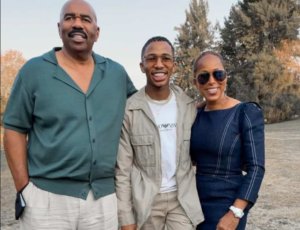 Lasizwe shared a snap of him with his “parents”, American couple Steve Harvey and his wife Marjorie Harvey. The comedian received some hilarious responses from his followers because of the way the presenter of Family Feud looked at him.

Lasizwe Dambuza was living it up with American comedian Steve Harvey and his wife and jokingly called them his parents. “I got a call from my parents they wanted to see their problematic son,” he wrote. He also mentioned that Steve reminds him of his late father who would give him the same look everytime he started acting gay, “Steve Harvey reminds me of my father… He would give the same look when I started going a bit gay.”

His followers started creating hilarious captions from the snap he shared.

The captions you guys are creating are wild af

"Son, get your flat ass back up real quick" pic.twitter.com/P8UUvEpYwC

Steve Harvey out there asking himself what kinda son is this one now 😂😂🤣🤣 pic.twitter.com/6bZbIUouc5

The Harvey’s had a private dinner and they hosted some of our A-list ZAlebs. Amanda Dupont took to Instagram and shared a picture of her and the comedian. According to her post, Steve dropped some wisdom and encouraging words to the attendees saying Africa has some true magic hidden.

“The Harvey’s Private Dinner. Such a pleasure meeting you, thank you for sharing your inspirational journey with us and reminding us that the true magic lies right here in Africa. Thank you to my Beryl Group fam for the love and countless opportunities in spaces destined for elevation,” she wrote.

She even met his first lady Marjorie who made her shed a few tears, “My mandate was to welcome you 🤍 and make sure you feel the love! I didn’t expect you to do the very same for me! You are such a gem and inspirational woman. I appreciate all your kind words and encouragement, you made me “ugly cry” even. 😂 You are everything goals – It was such a pleasure to share a moment with you xx”

Lasizwe is currently in his prime right now. The boy has a promising YouTube channel called Drink or tell the truth where he hosts celebrities and they play a fun game, which is a spin-off of truth or dare.

His first guest was Ntando Duma who revealed a lot of secrets about her love life, friendships and worst scenes she played on TV.

He then had Amapano duo, Major League DJ’s who also did not have a problem with spilling some truths.

His last guest though was the entertaining Zodwa Wabantu who did not even touch her drink – not even one bit. Zodwa’s episode had us wanting to excercise our own rights to freedom of speech and gaining the courage to not beg for people’s approval.

After the episode aired, Zodwa trended for as long as she could. She revealed that she smashed Black Motion’s Thabo who is dating his baby mama. She also revealed that she does not like Zahara because she ruined her birthday celebration.

Thabo hit back at Zodwa and admitted that they had sex but he defended his girlfriend, My side of the story, okay before anything you guys need to respect the mother of my child because she was not involved, I was not seeing her I was not in a relationship with anyone at that time hence I did what I did, please respect the mother of my child, It’s fine if you judge me nna ha kena taba, keya iphelela(I don’t care I am living my life),” said Thabo on a video he shared on Instagram.