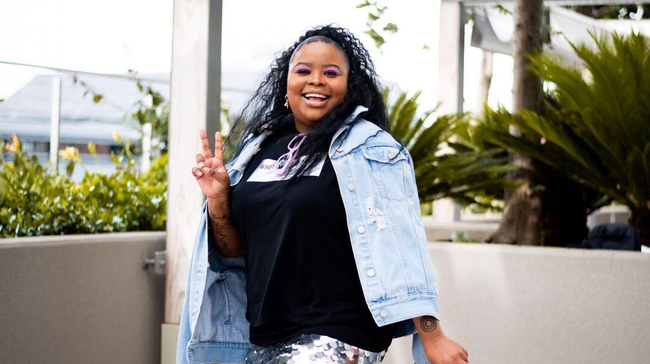 Writer and comedian Lesego Tlhabi may be best known for her much loved alter ego, Coconut Kelz, but she is also making her mark on our TV screens as one of the leading cast members on SABC’s popular show “uBettina Wethu”.

The show follows the endeavours of the main character, Betty Sikhakane (Farieda Metsileng), as she navigates her first job in the City of Gold and is based on the successful international format “Yo Soy Betty La Fea” – most familiar to local viewers as “Ugly Betty”.

In addition to the humorous and compelling storyline, the show boasts a talented local line-up including Zweli Dube (Dingaan Jiyane) and Tsholofelo Mashishi (Linda Jiyane).

“uBettina Wethu” kicked off on SABC1 in April and regularly appears in the top 10 most-watched shows on the channel, drawing over 2.5 million viewers for each of the trio of weekly episodes.

GLAMOUR South Africa caught up with Lesego to chat about her life and her big acting break.

How was the transition from being a popular YouTuber to being an actress?

Well, I went to varsity 10 years ago to study theatre and performing arts so it was always my intention to pursue a career in acting and performing.

The transition was seamless because I play a character all the time and my background is acting.

It was extremely exciting to finally have that “big break” moment because it’s been a long time coming and a lot of work behind the scenes to get to this point.

What inspired you to go into acting?

I honestly can’t say. I’ve wanted to act and perform in general since I was a child and used to make my family sit and watch me in various skits or choreographed dances. I’m sure my first words were “quiet on set!”.

What’s the toughest thing about being an actress?

The hours are really hectic. People don’t realise we sometimes have A 12 hours a day, 6 days a week schedule.

And putting yourself out there can also be difficult because people have so many unsolicited opinions and they feel they just have to share them for some reason.

Tell us a bit more about your role in “uBettina Wethu”?

I play the role of Zaza Moloi, the social media queen at Nubia, which is the brand agency most of the characters work for.

She’s confident for the most part but like everyone else has her insecurities especially where body image and bullying are concerned. We work through that together, Zaza and I (lol).

She’s a colourful character and she is definitely no shrinking violet – you see it even in her style choices and the fact that she’s not afraid to speak up for herself, even to her bosses.

This is the story of @ubettina_wethu:

She finds her self-worth challenged when she is employed at a brand management company, a place where people value image over substance.

Do you see any similarities between Zaza Moloi and your YouTube channel alias Coconut Kelz?

I think because they’re played by the same person, there will always be similarities to a certain extent but Zaza and Kelz are the opposite sides of the same coin, I guess, so still very different.

Very different upbringings and lives but I guess they’re both vocal about the things they’re passionate about.

GLAMOUR: What does it mean for you to be a young person in South Africa right now?

Coconut Kelz: I won’t lie, being a young person in South Africa right now means a lot of disappointment … a LOT … in our leaders and a lot of uncertainty in the future.

Unemployment figures are at an all-time high and our leaders are stealing and just letting us down at every turn.

I’m sure I was meant to write something more inspiring but right now that’s how I feel.

What would you say scares you the most about being in the spotlight, especially as a young black woman?

The fact that grown ass men (mostly white) spend a lot of energy trying to tell me what to do with my platform and make thinly veiled threats because I won’t “comply”.

The misogynoir is scary because I know one of the things that most annoys men is when a woman does what the fuck she wants to do. And that’s me.

The constant threat of violence because my work exposes racism is anxiety-inducing as well.

South Africans at large are not ready for any form of the truth because in 1994, a plaster was put over a gaping wound and they never really had to actually do any introspection or any actual change.

What would you say to someone who wants to follow in your footsteps? Three tips on how to make it in the showbiz world?

I would tell them not to follow anyone’s footsteps because you don’t make it anywhere trying to be someone else.

But for anyone who wants a career in entertainment, I only have two steps and that’s:

1. To put yourself out there. Create that channel, or podcast or get to making jokes on social media. Whatever you want to do, you have to make sure people see you doing it already.

2. Don’t listen to what haters have to say. So many people want to derail you, want you to feel bad about who you are and what you do and your belief in self – it’s called projection and disappointment in their own lives.

Bring him down syndrome reigns supreme in SA. The only opinions that matter are the ones of people who love you because the criticism is always constructive.

But don’t allow a stranger to ever make you feel bad about yourself.

What are the 5 things people would be surprised to find out about you?

This thing of you asking specific numbers bathong! LOL!

2. I’m a really good dancer in a variety of styles as I’ve been dancing since I was a child and even represented SA in hip hop championships.

I’m also a tap dancer (I don’t do it anymore but would love to find a place that has adult classes that aren’t beginner), did ballroom (would also love to get back to this).

3. I can sing quite well and wanted to actually be a singer at some point. I studied musical theatre in NYC and it was one of my majors at uni.

4. I am a really anxious flyer. Girl turbulence is a sign that we’re going down.

5. I have 14 tattoos and counting … Although that might not be too surprising but I’ve run out LOL.