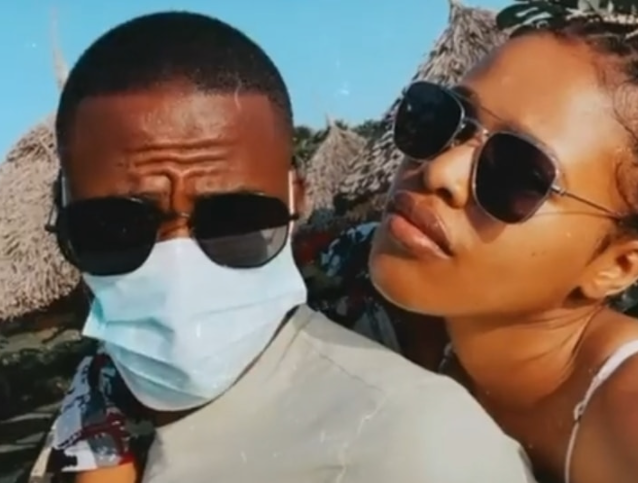 In a recent Instagram live, Thembinkosi Lorch revealed that he is a single man. The soccer player left his followers confused with this statement because we all know that he and actress Natasha Thahane are an item. Could this be yet another publicity stunt?

Lorch and Natasha have been dribbling the nation ever since they started off their relationship. At first they denied each other when social media detectives concluded that they were an item, and were on holiday together at the Maldives. Lorch pulled a ‘Natasha who?’ on his friend DJ Maphorisa who asked him without beating around the bush.

Natasha too even joked that she was a single woman on Twitter. But now, months after making their relationship official, Lorch decided to pull fan’s legs once more, by saying he is single. He even went on to say, he wants someone who is going to marry him, “Ai mina guys I am single. I am looking for someone to marry me,” he said. The woman next to him warned him to not talk like that, and proceeded to laugh.

Lorch made that statement when fans flooded his comments section asking him about his injury and his boo, Natasha Thahane.

Speaking about his injury, Lorch reportedly suffered a freak accident at his home. His club, Orlando Pirates confirmed this and even revealed that he has undergone surgery. According to Kickoff, he would be taking the rest of the year off to take care of his health, “Lorch, we won’t see him for the rest of the year, he’s out with a long-term injury,” said his co-coach Fadlu Davids.

This is not the first time the couple sparked break up rumours. A few months into their relationship, they unfollowed each other on Instagram and deleted the pictures they posted.

A few hours later, Natasha suggested that she is going through a stormy period in her life but God is helping her remain calm. She wrote, “Never been so calm in the middle of a storm. It can only be God,” she said.

But Natasha squashed those once again, as she posted on her IG stories a bouquet of red roses and said “Thank you Mr. L.”

As expected, after revealing that she was no longer single, Natasha said men have been flocking her DMs trying to get with her. “Amadoda angaka in my mentions axakwe indaba zam (so many men in mentions all up in my business. I miss the days when men used to go to war,” she said.