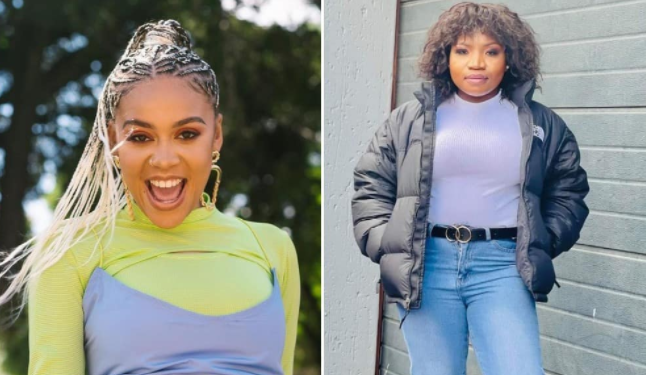 Social media has the tendency of pitting two great artists against each other even when it is completely unnecessary to do so. They often say the pie is big enough for every body to enjoy however everybody wants to come out tops by creating unnecessary beefs – and it is usually the fans who support this.

Commending an artist and uplifting them should probably be done without degrading another. This is what many are saying on Twitter after certain tweeps compared Sho Madjozi with Makhadzi.

It all started with a video of Makhadzi dancing along to her song Ghanama, with two other dancers. Many felt Makhadzi deserves to be bigger than what she already is however tribalism and colourism is pulling her backwards.

Hailing all the way from Limpopo, Makhadzi’s rags to riches story is one that we all admire. Another fellow Limpopo Queen, Sho Madjozi who gained international fame with her hit song John Cena, was brought into the debate. People said Sho only became famous because of her beauty and skin colour. Other mean comments suggested that Makhadzi could also reach Sho’s stardom if only she was light skinned and beautiful. Not a cool thing to say indeed.

“Convinced Sh* M*djozi did so well in such a short space of time because she was light skinned. This lady makes good music, works hard & is a star but we know why she’s so overlooked,” said @NalediSekoto shading Sho Madjozi.

Convinced Sh* M*djozi did so well in such a short space of time because she was light skinned. This lady makes good music, works hard & is a star but we know why she’s so overlooked. https://t.co/Iof4WXIky5

Other tweeps came for her and slammed her for wanting to downplay Sho’s hard work.

“Sho Madjozi peaked at the height of iGqom with a Gqom track. I don’t think it had anything to do with her skin colour. It was a wave at the time. Just like any Amapiano artist now. Every individual has a music preference. It’s has nothing to do with the artist brilliance,” commented @TboozeSA.

“You’re projecting. Makhadzi has sold more records than Sho Madjozi and nothing about her is overlooked. She’s a star. Both are,” said @BrynxMello.

“It be women pitting other women against each other. Colourism is a problem yes and it plays a factor in most cases, but you cant reduce someones hard work and accolades to how light their skin colour is. Sho Madjozi does nothing but mind the business that pays here,” said @DebbieBloodmoon.

Here are other comments:

“Makhadzi is overlooked cause she not light skinned like Sho Madjozi” 💀💀💀 Brenda Fassie? That lady pulled numbers with her dark skin. There was nothing anyone nor the industry could do to dim her light. I’d give anything to have her alive. Busiswa light skinned? 🤷🏽‍♀️

You guys are the ones not listening to Makhadzi. Last year her song was song of the Year on 3+ radio stations, this music video is en route to 1M views only having dropped 3 days ago. Sho Madjozi was not the only artist to blow up when GQOM exploded, Moonchild?Busisiwa? Babes? https://t.co/sO4fgudItI

Sho Madjozi worked. Let’s give credit where credit is due. https://t.co/no2AcMYlp0

Colourism exists and we acknowledge that but let's not disrespect Sho Madjozi, she works her ass off. Let's leave her alone https://t.co/KGbhyi7Zqq

I bet Makhadzi feels overlooked, have you seen her youtube numbers? lol Sho Madjozi worked hard to be where she is, you bring this colourism thing everywhere, Brenda Fassie,Euphonic,Black Coffee and many dark and still pulled numbers

The two ladies were just minding their own business when all of this happened. Sho has not really been in the spotlight these past few days but she is busy pushing her side hustles as a brand ambassador for Play energy drinks.

The last time she made headlines was after the Anele Tembe saga. It was reported that Anele cussed Sho after she called AKA in the early hours of the morning to discuss their music video shoot for Casino.

Shawn Nkuna, Madjozi’s manager was instructed to relay this message to Sho: “From my understanding, Kiernan and Maya (Sho’s real name) work together, which is strictly business…so what I would like to know is why the f*** was she calling my man at 1AM in the morning, and what was so urgent. In fact I would like her to message and explain her story,” Nellie allegedly wrote.

From what the sources explained to Sunday World, the Huku hitmaker did not appreciate Nellie treating her like a broad so she decided to just let things go.

Makhadzi trended after her beef with King Monada as the two were fighting over ownership of Ghanama. Makhadzi said Monada treated her like a dog during their recording sessions.