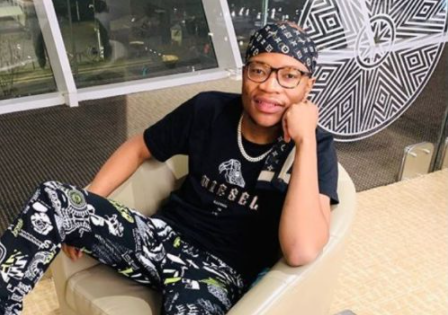 Master KG has acquired immense success through his Jerusalema hit single, but what did he used to do before being this famous. The wealthy music producer revealed to his fans that he used to actually be a rapper.

A fire caption he posted on social media is what sparked a follower’s curiosity as to what type of music Master KG listens to. The music producer said he used to be a rapper by the name of Young KG, before he became the Master KG we all know today. According to him, he used to drop really dope lines.

I was a rapper before I became Master KG I was Called Young KG my lines were really Hard 🔥 https://t.co/uTema5533Y

The wealthy artist is also in celebratory mode as his streaming numbers on Spotify are leaving is haters with palpitations. With his hit single Jerusalema sitting at almost 300 million streams, he is hopeful that he will hit a billion streams in no time.

According to album talks, Master KG has created history with this achievement, “It becomes only the SECOND album of all-time by an African act to hit the milestone.”

I'm doing a billion streams soon my album is on de way… https://t.co/8GKrpuqk9f

Also his new album is on the way and is excited for his fans to have a listen. “I take time without being in the studio but every time I enter something special is created! New Music loading.”

Master KG recently got dragged on social media for bragging about his wealth. He had just gotten back from his tour in Europe, where he decided to take a short left trip to Sandton. He went inside a Diesel store and a black leather jacket caught his eye. Instead of just buying it and wear it in peace, Master KG decided that his followers needed to know how much he spent – a whole R28K!

People were so pressed by this that they forgot how Master KG was throwing money to his followers who needed it the most on Twitter.

I came back from tour With couple of Euros 💶 And I went straight to Sandton @dieselsa To Get Some Drip..swipe next to see more #WeBACK pic.twitter.com/qaAZDLDs6B

Another artist who was really working hard before getting her big break is Lady Du. On Facebook, she told people to put some respect on her name, “I take everything I do serious, you can put me anywhere, I have 19 qualifications, I’m not just a musician!!!! NOT THE NORMAL ONE ke mina.”

Detailing all of her qualifications because nobody took her seriously, she took to Instagram and said what she used to do but also added a few words of encouragement. “I worked on a ship travelled the world doing beauty, studied fire fighting, teeth whitening specialist, and safety officer position. came back worked at my dad’s shop, then worked with trucks (logistics), then worked organising events for a foundation. All that money I invested back into my music.”

“Come hell or High water, pay or no pay they [dancers] got paid. They stuck by me when I had no hits, today They get to share my dream with me. Whatever I have they will have. you might not like the job you have but make use of it. Everything I have comes from my own hands,” she bragged

Kagiso Sento Is Cautious Of Her Health