Mihlali Reveals How Much She Paid For A Bag

Mihlali Reveals How Much She Paid For A Bag 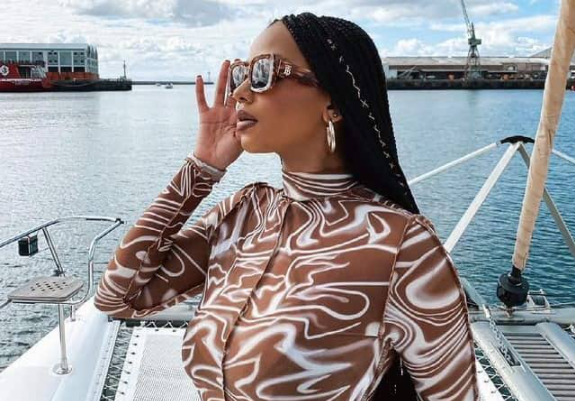 YouTuber and award-winning content creator Mihlali Ndamase left fans stunned after she revealed how much she has paid for a bag.

Mihlali made another appearance on Lasizwe’s Drink Or Tell The Truth show on YouTube yesterday.

On the show, Mihlali also spoke about her relationship with one of the Major League twins, addressed rumors that she stole someone’s man and revealed the amount of money that she has spent on a bag.

Mihlali revealed that she spent a whopping 40K on her small LV bag. She also showed the viewers her expensive bag.

Reacting to Twitter accusations that she stole someone’s man and was labeled a homewrecker she said: “Last time I checked man are human beings who are grown, who can make their own decisions. He is not a sack of potatoes, I have never stolen a man, I don’t know how to steal and that’s my answer.”

Lasizwe also asked the YouTuber: “Did you date the Major League twins and if so between Bandile and Banele who was it?”

She responded: “I mean this is public knowledge, yes I dated one of the Major League twins, and I dated Banele Mbere. You gotta own your truth!… that was my man and I stood by him. He is a very nice guy.”

Here is the full episode of this week’s Drink Or Tell The Truth.

Meanwhile, Mihlali caught fire a few days ago after she jokingly tweeted that she wants to loot Merc.

In a now-deleted tweet, Mihlali wrote: “When are we looting merc?”

Tweeps did not receive this well and started calling her out for her “reckless” tweet.

Reacting to Mihlali’s tweet, Hazel tweeted: “Must be something in those makeup brushes or foundation because wow. Don’t tell me that she didn’t ask to be anyone’s role model as a public figure you have an equal responsibility, that accompanies your fame and some things should stay in your drafts. Please”

Mihlali later issued an apology saying that she was just joking. She said she learned her lesson.

“With immediate retraction, I’d like to apologize for the tweet I published earlier. I jokingly put that out without considering the harm it may cause given my position. The intent wasn’t to be insensitive.

“Mercedes Benz is one of my favorite car brands, I adore them, hence the joke. Of course, I wouldn’t wish that on any business or person. This is a lesson learned and once again, I sincerely apologize,” she tweeted. 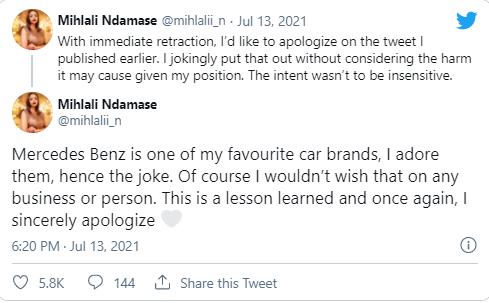 “It Has Been Hard For Me”