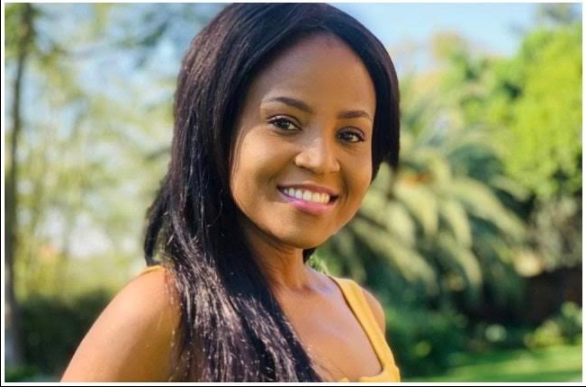 Former Muvhango actress Millicent Makhado has warned her followers about scammers who are using her name to scam people.

Millicent took to Twitter to bring her followers to light, she said the scammer has been sending people Whatsapp texts asking for money.

On one of the Whatsapp messages leaked by the actress, the scammer borrows money and promises to pay it back the next day introducing themselves as Millicent Makhado.

Millicent tweeted: “This person is scamming people, asking them for money using my name and this number 0716272128.”

This person is scamming people,asking them for money using my name and this number 👉🏽 0716272128 🙆🏽‍♀️😭 pic.twitter.com/qglMTEDuDq

Another one of our favorite celebrities whose identity has been used by scammers is Reality TV show star and Businesswoman Shauwn Mkhize.

A few days ago she told her followers to be aware of a fake account that was offering people investments using her name.

She wrote: “Please note this is a fake account I DONT DO INVESTMENTS OR BITCOIN and I don’t have Facebook or TikTok accounts myworldmyrules #kwamamkhize”

The fake account was promising people massive returns and a chance to win an iPhone when they invest R15 000 or more.

“It’s happening on my WhatsApp more than 500+ testimonials, lives are changed, I’m so happy. Nothing is more expensive than a missed opportunity. Opportunities are like sunrises if you wait to…” one of the scammers’ message read.

Meanwhile, MaMkhize is continuing to live her best life. She recently broke the internet after it was reported that she bought a top football club for a whooping R50 Million.

In her post on Instagram today, she encouraged her followers to raise a generation of strong women that are self-aware and do not need validation.

Sharing her throwback picture, MaMkhize wrote: “Good Morning, I recently came across this old picture of me and thought I should do a throwback. As I looked at this picture I asked myself: what do I know now that I wish I could tell 19-year-old Shauwn. The answer was a no-brainer…”Babes, you are stronger than you know. Be aware of your strength because you are gonna need it for all that lies ahead.

“Most of all make sure your strength matches your heart because both will be tested!!!” To all of us raising young girls, let’s raise a generation of imbokodo that are self-aware and do not seek validation from things or people that will interfere with their progress. If the future was a gender, I think it would definitely be FEMALE!!! Happy Thursday darlings”